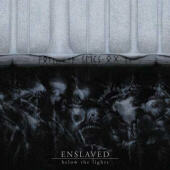 I’m telling you right now, Enslaved is one of the most underrated bands of the nineties. Even Emperor was able to gain a substantial amount of praise for a sound that was abrasive, technical, and experimental. Yet for some reason, Enslaved still haven’t broken through to the forefront of the scene itself.

The year 2000 brought about great change for Enslaved, namely “Mardraum: Beyond The Within.” “Mardraum” was a huge leap for the band and no doubt one of the most interesting, unique, and important things of that year. Their follow-up, 2001’s “Monumenion,” was no different. Both of those albums are milestones for the band, and true gems of modern “metal.” So now Enslaved leap into the year 2003 with their seventh album, “Below The Lights.”

Naturally, the loss of guitarist R. Kronheim is doomed to take its place on Enslaved. Kronheim seemed to bring a strong vigor to the life of Enslaved, yet even without him, “Below The Lights” portrays Enslaved in good health, and also, in yet another light. You didn’t think that Enslaved was going to release the same album twice, did you?

It is important to realize that “Below The Lights” is two things: a progression for the band, yet it is an album that is completely tied into the history of Enslaved, as far back as “Vikingligr Veldi” and as recent as “Monumension.” It has always been like Enslaved to use their skills in new ways, and as tools for progression. The songs of “Below The Lights” are significantly more structured, yet there is a sense of progression, building, and climactic action. You’re not stuck with something that is held back by formulas. Enslaved still takes you on quite a journey with lots of surprises along the way. The intro to ‘Queen of Night’ was quite a surprise, as was the excellent land lengthy intro of ‘The Crossing,’ and the return to Viking roots on ‘Havenless.’ Every song really shares it’s own secrets to be discovered.

With Enslaved I always feel the need to mention musicianship. Besides the excellently crafted songs – the mark of a good musician – Enslaved excel in performance. Ivar Peersen’s guitars rip through everything with startling contrast between ideas, and his excellent use of dynamics. Of course, what would Enslaved be if not graced by the clean and black metal vocals of Grutle Kjellson? Kjellson offers another great performance, as do Dirge Rep and new guitarist Arve Isdal.

Lastly, as I am quite aware that the length of this review is getting a bit extensive, I must mention the atmosphere and emotion. There is a genuine Enslaved style atmosphere going with “Below The Lights,” as well are some new emotions being played off of. Of course, everything is presented with utmost emotional input.

Bottom Line: While not the best thing that Enslaved has released, the fact that it’s even Enslaved at all says a lot. “Below The Lights” is a fantastic addition to the Enslaved fans collection, and it still proves to be one of the best albums of 2003.