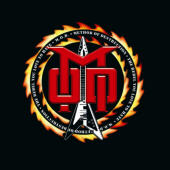 This title comes from one of Frank Zappa's albums and I hope that humor does belong because this album is a kind of joke I would say. Now don't go anywhere, I didn't say it was bad, did I? It's not, ok? I was expecting something not too good with bad production, but it's not actually. Method of Destruction is a perfect stranger to me but perhaps I'm some kind of weird ignorant! Anyway, if you don't know him either, please go see him on the label page, you won't regret it. I guess the phrase "what you see is what you get" takes all its meaning right there: a big fat ugly mofo smoking the cigar, blowing the smoke right into your face. It makes me feel sick! Excuse me while I throw up. Just kidding. But seriously, this guy (Billy Milano) is not to be taken too seriously because he's not.

Musically speaking, he's giving us a massive shot of good ol' dirty, ass kicking hard rock & roll. This stuff is well done and well produced much to my pleasure. It's catchy and not too complex with some pretty straightforward writing. It gets to be a bit repetitive after a while, honestly, but that's all right. One little bit of a draw back is the fact that from the 13 songs, 5 of them are just a slightly different version of the other 8. One in particular, 'Rebel,' is there three times for some reason.

My vote will go for the 'De Men Of Sten' and 'Get Ready.' While the first song listed has some psychedelic moments, a good chorus with backing vocals, the other has a tight rhythmic section, and like every other song, remains simple but efficient, catchy and arrogant with a good share of groovy riffs. One last thing: on 'He's Dead Jim,' the lead guitar goes for a rendition of the Star Trek theme and actual excerpts from the show can be heard throughout the song.