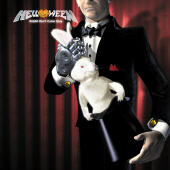 Type: Full-Length
Release Date: 2003
Label: Nuclear Blast
Genre: Power, Speed
1 Just A Little Sign
2 Open Your Life
3 The Tune
4 Never Be A Star
5 Liar
6 Sun 4 The World
7 Don't Stop Being Crazy
8 Do You Feel Good
9 Hell Was Made In Heaven
10 Back Against The Wall
11 Listen To The Flies
12 Nothing To Say

When I first started listening to metal, it was bands like Dream Theater, Rhapsody, Symphony X and so on that I enjoyed. Then came some more power bands like Gamma Ray, Blind Guardian and Helloween. Later on, I discovered Tristania, and a new horizon was lighting up for me after being tired of the power metal trip. All this lead me to become intoxicated by the avant-garde style and running as far away from the power metal. Now I got "Rabbit Don't Come Easy" from Helloween in my hand and boy do we have a problem.

As far as I can see, power metal is still at the same point from where I left it a couple years ago. Not much has changed and in the case of Helloween, the only change that did take place was for the worse! Too bad those talented musicians are stuck or sticking to such a non-evolutional type of music. It's not that it's not good at all, it's just that it is the same formula used and re-used. To make matters even worse, the music has a more commercial edge this time around. At least there are good parts, however. They are mainly the intros, plus the instrumental sections that can be found on each and every song, which are all built with a pretty similar structure. Those compensate somewhat for the rest of the power crap and the cheesy sounding singer. In Germany, these types are called "Eunuchen metal" guys without eggs! As in many cases with bands like this, the guitar work is simply superb, especially on 'Liar,' 'Nothing To Say,' and the best one, 'Back Against The Wall.' On it you can find keys, industrial parts, groovy riffs and some devilish/deranged moments.