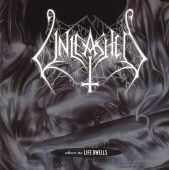 Type: Full-Length
Release Date: May 1st, 1991
Label: Century Media Records
Genre: Death
1 Where No Life Dwells
2 Dead Forever
3 Before The Creation Of Time
4 For They Shall Be Slain
5 If They Had Eyes
6 The Dark One
7 Into Glory Ride
8 ...And The Laughter Has Died
9 Unleashed
10 Violent Ecstasy
11 Where Life Ends
MetalBite on YouTube
MetalBite on YouTube

What is the most appropriate term for Unleashed's debut? Semi-legendary, groundbreaking or just another Swedish death metal album? One thing is for sure, the galloping rhythms of 'Before The Creation Of Time' gave birth to the group's first classic. The song has everything a typical smash hit of a young metal band should have. Forward thrust, power, speed, catchiness without lard and an anti-mainstream attitude. It may not be a masterpiece of innovation, but this track was the first to grab me by the collar and threatenly murmur in my ear that I'd better get interested in Unleashed's music if I don't want to miss anything essential.

But of course that doesn't mean that the other pieces don't have anything going for them. Immediately after 'Before The Creation Of Time', the equally fast-paced 'For They Shall Be Slain' storms out of the speakers, followed as a counterpoint by the abysmal, dragging and threatening 'If They Had Eyes'. Heavy riffs and a demanding, but never really fast double bass form a rough block, whose grumpy melody is blown away by the northern winds at the end. These two songs define the musical range of the album.

Basically, Unleashed know the value of fast-paced songs. The album reaches an impressively high peak for the second time with 'Onward Into Glory Ride'. Again, a tank rolls over the listener, especially during the verses, although the quartet manages to give the whole thing a certain light-footed character as well. This full-length is not about lower and still lower tuned guitars. Nor is it about the most inhuman rattle possible. Hedlund, of course, doesn't twitter like a little bird at dawn, but his powerful organ doesn't need any major technical processing either. He cuts a fine figure with his sinister timbre.

Although Unleashed show no signs of flaunting their technical prowess, there is no mere rumbling on offer here. This may also be a merit of the oppressive production, which focuses more on transparency than on an underground compatibility. The mix helps all the musicians come into their own, even though the guitars may sound a little monotonous - and that is perhaps why the individual songs do not immediately distinguish themselves from each other to the degree expected. However, the dudes are able to keep a high degree of energy from the beginning to the end. They do not run out of ideas and so the finishing closer is more or less as good as the first regular song after the bootless intro. In all honesty, despite its great reputation, I don’t think that Where No Life Dwells is the best album Unleashed have ever released. But it provided the band with a hard-to-miss entry in the encyclopaedia of early nineties death metal.