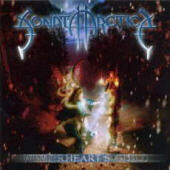 One of my all-time favorite albums is Sonata Arctica’s classic Unia. Their fifth album in a very prolific career, one that is as heavy as it is dark. The perfect album that should be used as the perfect example for the term ‘Genius’. I'm now given a chance to review their third album called Winterheart’s Guild; one album I have not heard as of yet, but itching to hear.

With complexity in their music abundantly shown, this Finnish band has cut a swath into the metallic scene like a tank through medieval armor. Impressive hooks and wild time signatures are a staple for the band, not to mention a huge monument to heaviness when the need came. Mixing a wicked melting pot of power, symphonic and progressive metal with the attitude of strong Nordic warriors, they are a true force.

I was struck with the difference I heard between this album and Unia. Almost a total revamping was what this band had done. This was more symphonic than Unia was, and not as dark in the arrangement end of things. "The Cage" is a very dark song about entrapment, as is the very eerie emotion driven "Gravenimage" but the album as a whole is lighter and more with the power/symphonic angle of things. It is not a bad thing to be a bit lighter, as these songs are impressive in their concept and development.

I love this album, but still never reach the near perfectness of Unia. Sonata Arctica are one of best bands out there that can still be bitingly heavy, fiendishly dark with lyrics which are very smart and imaginative all the while being very progressive. You can be assured that major outbreaks of headbanging will appear in a heartbeat. Now that is being good!

You know what I like about power metal? Sonata FREAKING Arctica! These guys were just babies when they blew us away with their debut album "Ecliptica." They followed it up with 2001's epic album, "Silence," which put them amongst the monsters of the power metal genre. They raised the bar on the quality of power metal music and put many of their older, more experienced counterparts to shame. With the bar raised so high, could they outdo themselves again? Unfortunately, the short answer is no.

Let us go over the perks of the album first. The production is killer of course and the musicianship remains tight and commendable. Tony Kakko's vocals are one of the highlights of the album as his range is simply amazing. The best thing is that on "Winterheart's Guild" they've actually got some balls! The keyboards are as loud and flaunty as ever and there is some great soloing to be had all over this baby! Standout tracks include 'The Cage,' the awkwardly titled 'Victoria's Secret,' and 'Broken.'

"Silence" was a super power metal album. It had it all! We all expected this one to be explosive and fly into uncharted territory, but sadly it does not come anywhere close. "Winterheart's Guild" is catchy and jam-packed with sing-along vocal melodies, but it's the same old thing. There are some minor grudges, some songs end rather abruptly and the first song is too long and complex to be the opener. Usually Sonata kick right in with a tight, fast, and memorable opener, but this song lacks any real unforgettable hook and the solo is fairly nonexistent.

The main grudge I have is that they really just played it too safe. "Silence" really showed us everything the band had to offer. Following up a record like that is undoubtedly hard work and Sonata just barely missed the mark. This is not a bad album by any means. It is actually really good! However, Sonata Arctica raised their own standards with their first two releases and "Winterheart's Guild" falls short of meeting them. Overall, though, the band remains one of the front runners in the power metal subgenre, and this still manages to be quite an enjoyable release.

Bottom Line: Fans of the band will probably like either of the first two more but this is still worth a buy.