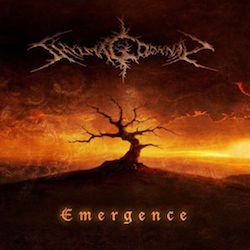 My story with Shylmagoghnar's debut is long - longer, in fact, than any other metal album out there. This was the album to introduce me to the genre as a whole, shaping my current taste more than any other piece of music I've ever heard. Three years later, it still holds up as one of the most unique and well-crafted records I know.

The first thing that sets Emergence apart from similar atmospheric melodeath is the production. It's astonishing that the mixing and mastering was done by one guy in his home studio, because the result is one of the cleanest, most expansive sounds I've ever heard. On some albums a squeaky-clean production hurts more than it helps, but this album is so macroscopic and ambitious in terms of theming that it needs that clarity to fully convey the concept.

And Nimblkorg's talent as a producer is not only matched but actually surpassed by his mastery of composition. The 9-minute opener 'I Am the Abyss', which may just be the best metal instrumental ever recorded in my opinion, is a perfect showcase of this; it flows seamlessly between cleaner, more ambient sections and distorted, metallic guitarwork, with a subtle integration of synths at certain points adding to the grandiose mystique the track evokes. Dynamics shift often enough to keep it interesting for the full duration but not enough to make it feel disjointed or crammed.

That compositional fluidity can be seen in many places throughout the album (though not on every track). 'Edin in Ashes' is the best example of its use on a vocal track, churning through an ever-changing array of riffs and emotions until it reaches a very well-earned conclusion. The other side of the coin is tracks like the titular 'Emergence', which build upon one central guitar-driven idea and create an atmosphere that way. Combined with the occasional weird experiment like 'This World Shall Fall' (a crawling, ominous melodeath track that somehow works without a single note played on guitar), the duo cement themselves as a creative force that does not restrict itself to any one structure or gimmick.

That being said, the album's vocals are a point of contention for some, consisting of simple mid-range screams for most of its duration. Skirge certainly does a capable job though, with several instrumentals and even Nimblkorg's takeover of vocal duties for one track offering up enough variety to stop the monotonous vocals from really becoming an issue.

Emergence is, overall, extraordinary. The combination of melodic death metal with elements of atmoblack is unlike anything else I've ever heard, and both the composition and the production give the release unique little quirks that add a lot of charm to it. The home-made nature of the whole thing is quite impressive as well - it sounds polished enough that I'd believe a big label like Nuclear Blast or Century Media was behind it, a far cry from most poorly produced home-studio efforts.

Melodic death metal is far from stagnant, and it's acts like Shylmagoghnar that keep the genre thriving. Be'lakor and Insomnium are still going strong, and it looks like an even newer wave of post-2010 bands are now taking it upon themselves to bring melodeath forward, each with their own personal approach to evolving the sound we've all come to love. And with two pretty much perfect releases under their belts, it looks like Shylmagoghnar are going to be the torchbearers in the movement.