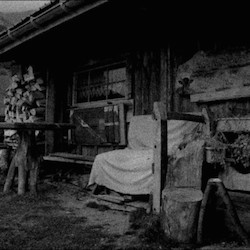 Hyrgal plays a misanthropic and melancholic form of black metal on this debut 2017 full-length record titled Serpentine. The general aesthetic generated seems to poke at a contempt for modernity. I was immediately on board when translating some of the lyrical content, so it had already won my interest in that aspect. As for the music, it attires the lyrics suitably with aggressive yet tender sheathings of melody and landscapes. Strange thing is, after looking at the artwork I was a bit reluctant to give the music a chance as it conjured a depressing sense; and knowing just how much I hate ‘dsbm’, my initial thoughts were to ignore this record. However, my open-mindedness (or perhaps tolerance is a more suitable word here), compelled me to at least read the lyrics in optimism that Serpentine would not be a bucket of tears. Having done so, I was relieved and even more-so eager to hear how the music sounded. Surprisingly, it turned out Serpentine was a very appealing record that went by with minor complaints.

The component I appreciate most about Serpentine is its consistency; it holds a steady grip on the atmosphere via music that (never thought I would be saying this) sounds better with each repeated listen. That’s going a long way from almost totally ignoring the material to enjoying every bit of it. Following the opening of “L’Appell”, “Mourior” teased my senses with fast drumming washed with catchy tremolo picking and a good use of tones to induce feelings of anger and at times small tolerable (by my standards) quantities of calm and sadness via acoustic intro leads and instrumentals. The ferocity on Serpentine is kept active through all this and is often approbated with changes in the tempo and rhythm to add a clad supporting the profoundness to the lyrics and general outlook the music. Amidst all this, I believe Hyrgal is capable of much more, as what has been presented on Serpentine is hesitant, giving the music a ‘safe’ stance. “Mourior”, “Till” and “Représailles” have a reoccurring sheen, that being how well Hyrgal incorporate and move between that fast 2nd wave black metal style of drumming + riffing and mid-tempo sections that converge in a uniting sense.

Though still a contemporary record by some measures, Hyrgal’s commitment to the music they make shows vividly, rather than conforming to the basic standard, knowing there is similar material to be found in large quantities. Instead they try to do what has already been done to a more effective degree by playing with, mixing the pace of the record and being flexible with the way contrasting tempos are introduced. I believe Hyrgal is merely toying with their proficiencies on Serpentine due to the restrained feeling of the compositions that are by no means lack-luster, rather they give hints of greater things to come. Serpentine is a convincing performance that highlights what Hygral can achieve should they decide to experiment with the genre.