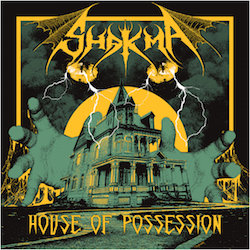 Shame on me, I did not know that the Bay Area has an extraterritorial base camp in Haugesund, Norway. Now I see that it was truly necessary to close this gap in my knowledge. Why? Well, sometimes energy meets musicianship and simultaneously velocity liaises with determination - and the best place for this gathering is the House of Possession. Indeed, the debut of these Norwegian youngsters blows a cold and bitter wind from the top of Europe in order to keep the thrash community alive. The slicing riffs cannot hide their Exodus-inspiration, but only the perfect debut of the American role models sounded as spontaneous as the first album of Shakma. Surely, this does not mean that the output of the Scandinavians is on a par with "Bonded by Blood" in all respects. The guitar wizardry of Holt and Hunold was and still is second to none and the masterful style of Paul Baloff (R.I.P.) will remain eternally unreachable, while the here presented vocals suffer a little bit from an overdose of reverb. However, this minor shortage does not affect the overall picture of this very impulsive work. No doubt, the quartet had a nice get-together in the House of Possession. Therefore, it is possessed by old school thrash metal and the guys know how to play it very effectively. Given this starting position, I experience one of the very few moments where I am glad that the total domination of black metal in Norway is a thing of the past.

90% of the material celebrates the beauty of high velocity. The band bares its teeth and attacks restlessly. Sometimes the dudes even forget to make a short break between the single cuts. "Knife of the Prowler" flows directly into the next song ("Into the Fiery Path") and with regard to the fact that both songs reach a nearly unbelievable quality level, I almost did not notice this smooth crossover. The entire B side of the vinyl lies in close proximity to perfection. Pick out whatever you want, each and every detail fits the undying youthfulness of the genre: the swirling riffs, the strict song patterns, the hoarse and extrovert barking of the lead vocalist, the thundering drums and the total dedication of the musicians. Shakma enter the stage with a bang and I don't have the feeling that they are satisfied when getting a seed in the second or third row. Main man Marco Runic is not only responsible for lead guitar and vocals, he has forged the vast majority of the tunes as well and his masterpiece is the absolutely overwhelming title track which kicks off the B side of the greatly designed full-length. Only "Ruthless Defiler" is written without a contribution of his side and rhythm guitarist Lasse Udjus takes his chance. He shows that he is also able to pen a fantastic thrash grenade which blends seamlessly with the material of Marco. The fact that the band has two competent songwriters ensures a good foundation for its future and I hope we will see (and hear!) further exciting results as soon as possible.

Self-righteous apostles of progress and innovation: piss off right now, your Sieges Even albums are waiting. Shakma do not offer specific elements. Not to mention any type of unique selling point. They just enrich the thrash movement with ten lively, malicious and compact songs. "The Mummy's Curse", the title track, "Into the Fiery Death" - you can put the needle on the vinyl wherever you want, only the closer of the A side, "Midnight Mass" has to struggle to find its equal place. Maybe this is because of the fact that this number breaks out of the high-speed scheme, but after all it does not matter. In a historical context, one has to go back more than 30 years in time to find a thrash association which can challenge the current community. And it feels good to know that Norway, this fascinating country with its metal-compatible nature, also has worthy representatives in this game. Shakma's fresh riffs, the snotty vocals and the dry, punchy and pitiless production shape an outstanding, extremely rapid album which is definitely worth to discover. Guess some guys in the Bay Area rub their eyes in disbelief. Even I do the same.