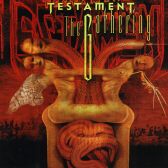 As soon as this CD started bellowing out in it’s mighty thrash metal glory I was already floating in heaven. Testament owed us big time and they were back, as their previous albums "Low" and "Demonic" were just about their weakest records ever. Well they must have started doing something right this time, ‘cuz I haven’t heard them this good since "Souls of Black"!

But that’s not the whole story, however, as the first 20 minutes of this CD kicked my ass and blew me away to that realm of metal perfection few others can create, I soon felt the ground beneath me drop. The first 5 songs deliver simply amazing riffs, dynamics and speed. A clear definition of fast, ass-kicking, low-tuned thrash metal. Avoiding the pretentiousness of "Low" and the monotony of "Demonic", this time the boys put away the Coors and get down to do some serious, hard work. The song structures are innovative and refreshing, the riffs technical, fast and brutal. The drumming skillful and intricate. The intro to "3 Days in Darkness" is just killer, the prime example of heavy and complicated riffing, "Down For Life" has the catchiest verse I’ve heard in a long time and the heavy and progressive "True Believer" reaches a climax of utter metal perfection.

And now for the rest of the album. I don’t know what the hell happened to the guys but after the 5th song Testament just dropped the idea of making the perfect thrash metal album and puked out the other 6 tracks. It surprises me that they didn’t even bother to mix up the great tracks with that bad ones. The first five were on a roll, and after that, gutter-ball. The whole album just drops and you’re thinking "what the hell? Who put this shit in the player when I was listening to an awesome album?". Unimaginative, stale and repetitive, I can’t help but just press stop after the 5th song. What a shame, I’d give it 10 if they’d made the effort and determination to produce what would undoubtedly be a mind-blowing thrash metal album.

Bottom Line: The first 5 songs get 10/10, the rest get 3. If you think five truly kick ass songs are worth the money, go for it!