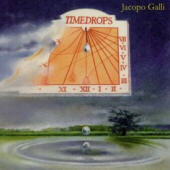 If your ears have been swollen lately by listening to an excessive dose of black or death metal, Jacopo Galli has come up with a soothing musical prescription.

"Time Drops" is a solo project it the purest sense. Jacopo Galli took care of just about everything, from playing all instruments, producing, recording, and mixing
in his own studio. All of the arrangements are strictly his. He also worked on the cover concept and graphic artwork. Talk about a gifted and versatile artist!

What we have on "Time Drops" is basically a well-arranged series of progressive compositions with varied tempos, frequent shifts in direction, and of course, great musicianship. The keyboards, piano and lead guitar are omnipresent and interact with each other in a very pleasant way. The guitars used sound just great and fit with the various moods his compositions bring about. The music is not aggressive, but more intense at times, by a crafty use of riffs and keys. All instruments sound great and are clearly recorded, even the bass parts.

My only complaint or the only drawback I would say is in the vocal department, where it seems that Jacopo is forcing his voice. A soprano backing vocalist would come in handy at times. Other than that, we have a great debut album with good compositions like 'Timeless Reality,' 'Days Have Gone' and the title track. Influences could be felt from prog masters like Genesis and Yes, but Galli is in no way just copying them.

Also, on "Time Drops" Jacopo Galli received some help from other musicians and vocalists on many compositions. 'Keys to Imagination' is an instrumental that was composed by Yanni.

Bottom Line: Sit down, relax and enjoy something soothing for a change.