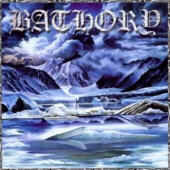 Closely following its predecessor “Nordland I,” here comes part II. This ”Nordland” is, like many reviewers are saying, picking up where part I left off. So much so that it’s kind of hard to tell them apart, honestly. I don’t understand many things with these two releases. First, I don’t see the point in doing two albums so similar. The other thing is, one would suppose that a band having so much experience would come up with a great epic metal album blessed with a top-notch sound production. Unfortunately this is not the case.

“Nordland II” is actually an epic metal album, no problems with that. It is presented with a melodic, mid pace structure living by the beat of a powerful percussion section. So far so good. Some songs are in a loose power metal style and are found on songs such as ’Death & Resurrection Of A Northern Son’ and ’The Messenger.’ The best ones, also the heaviest pieces, form a trio composed of ‘Sea Wolf,’ ‘Vinland’ and ‘The Land’. These three are worth mentioning, seeing as they are the better sounding parts of this opus. Which brings me to the poor production this album was given. This, for me, is a big part of the problem. Way too much emphasis has been given to the pounding percussion and very little room for the other instruments has been left, leaving them sounding pretty weak and too far in the background. Also, Quorthon’s clean vocals sound out of breath most of the time. To summarize my overall impression of Bathory, they sound like a tired and weakening Viking ruler who’s not too convincing in trying to get his raging army out in the field to conquer the expecting fan base (old and new). “Nordland I” had more color in it by using more nature samplings and medieval, folkloric passages. I don’t see the use in stretching the venture into a feeble follow-up.

Bottom Line: Given a proper production, this could have been a much better album. However, it wasn’t, and the outcome is not so great.