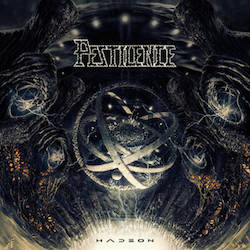 It is very hard to write about an artist like this one. This is the same band that recorded Testimony of the Ancients and Spheres, albums that basically defined the Benelux death metal scene for years.

And it is difficult to not have bigger appetite than this album can satisfy. I was very happy for them to return after 16 years of hiatus (time between Spheres and Resurrection Macabre albums) and initially thought that they are just starting off from a safe ground, a style that was their trademark. But listening to another album that sounds almost the same you start thinking if this band was going somewhere or just keeping that same ground for the next 9 years.

Unfortunately this album also is the safe option, almost as if it could be called "Tracks that were too 'Spheres' to make it to the 'Testimony' album, but then too 'Testimony' to make it to 'Spheres'". Don't get me wrong, there's still no other band like Pestilence, but I think somehow I expect some more development in this style. Or at least another "Stigmatized" or "Land of Tears". Or maybe another "Mind Reflections" or "Spheres" (title track from the album) or "Changing Perspectives". But the most we get is another "The Secrecies of Horror" with a "Spheres" vibe. It definitely fills that space in Benelux death metal scene for bands that input some, I don't know, progressive or even jazz elements? Disharmonies that can be recognized from the very beginning with some phrases resonating disbanded (and missed) Comecon. And this is really solid album, even if it's not surprising at all.

Brilliant solos with chaotic riffs in the background ("Oversoul" for example) with some tiny experiments, but generally almost everything is being played at the same pace. Good point is that Patrick Mameli likes to experiment with his growling sometimes, with some his growls going really, really deep. Makes some elements of the album sound very heavy. Technically also it's impossible to find any fault here, guys know how to use their instruments, I can almost imagine myself trying to learn all of these riffs, because some of them are really sounding cool. It's just putting them together somehow didn't make it an exceptional album.

If you're looking for some strange experiment, listen to "Astral Projection". I don't know what to make of this track and its unusual "addition". Check it for yourself and decide if that's the kind of experimenting you are looking for in death metal.

One thing I am sure of - I am glad that they are still searching for some new content, so there is hope one of their future albums will grab my heart. But this album is not it, yet. It's probably going somewhere, but it hasn't reached that point yet. But after that track there's also "Discarnate Entity", which is getting close to being "something", maybe this could be the promoting track, maybe could have some cool video. "Subvisions" shows that Tilen Hudrap also can play bass like probably Tony Choy would if he was still playing with them. That's another good side of this album - the bass can be heard pretty clearly and it's definitely a valuable addition to the whole sound and I guess he's the member that's worth keeping. And maybe hopefully come up with his own ideas how to make rhythm section more interesting in future. Although you have to admit, that Patrick Uterwijk leaving only Patrick Mameli as the last of founding members. Tracks definitely worth listening to are "Non Physical Existent", "Oversoul", "Discarnate Entity" and "Ultra Demons" if you want to have the taste of the album. "Layers of Reality" have a very interesting set of solos that could be something enhancing their musical palette. But the track "Electro Magnetic", closing the album makes a kind of full circle to go back nearly to the same composing pattern as "Non Physical Existent". So, to sum up, this album is definitely easy to recognize as another position in Pestilence's library, it maintains the high technical quality, the riffs are complex and precisely executed, solos are interesting and it seems Santiago Dobles can be another good guitarist to play for this band. Mastering has been done by Dan Swanö, so there is nothing to complain about - vocals are very good, both guitars can be heard very well, solos are always in the front, not hidden behind a wall of rhythm guitar riffs, drums also are in the perfect balance with all of the other instruments. The workshop works perfectly. Now we need to wait for some invention, that spark that will make the details shine.

Generally strong position, but maybe because of my high expectations it left an unfulfilled hunger for at least one more "Stigmatized". When I get that, the album will get 10/10. Hadeon unfortunately can get only 7/10, which still proves they maintain high quality of their material.