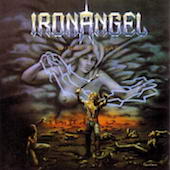 Type: Full-Length
Release Date: 1986
Label: Steamhammer
Genre: Power, Speed
1 Winds Of War
2 Metalstorm
3 Son Of A Bitch
4 Vicious
5 Born To Rock
6 Fight For Your Life
7 Stronger Than Steel
8 Sea Of Flames
9 Creatures Of Destruction
10 Back To The Silence
MetalBite on YouTube

First things first, Winds Of War is, despite its really kitschy artwork, a fine effort from an objective point of view. It holds a couple of pretty fast tracks which score with robust riffs, concise choruses and the vigorous performance of lead singer Dirk Schröder who makes good use of his variable voice. The remaining tunes are more or less solid, maybe with the exception of one downer that begs for a place in the next garbage bin. But okay, one might say that nobody is immune against a failure every now and then. Thus, there is actually no reason to cry. As said before, a fine effort.

The problem is that the predecessor of Winds Of War, Iron Angel's debut, was so much stronger than the here reviewed full-length. It sounds rather ironic, but the winds of war are blown away by the band's first work. However one looks at the two albums, the sophomore full-length draws the shorter straw. The aforementioned downer 'Born To Rock' with its crude, commercial approach only marks the tip of the iceberg. Gang Green had an eponymous, similarly constructed piece on "You Got It". Both bands seem to have the ambition to beat Bon Jovi with his own weapons. Needless to say that this idea was doomed to failure. Bon Jovi delivers endless streams of commercial shit and no one can defeat the excrement expert on his own soil. Okay, this embarrassing attempt to get airplay remained an isolated case, but it matched the airy costumes of the band members which were shown on the back cover. Furthermore, it was aligned with the new sound of Iron Angel. The sinister atmosphere of Hellish Crossfire did no longer exist. The clear yet powerful production lacked dark elements and the lyrics had lost any "satanic" approach. Iron Angel rode roughshod over the expectation of their fans and the only reason for this was probably their greed. We all like to get money for our work, but this does not mean that we do everything for money, right?

Well, I do not want to be too harsh with my previous heroes. The fast, double-bass driven and straight 'Vicious', the best, darkest and most intense song of Winds Of War, challenges the highlights of Hellish Crossfire, 'Metalstorm' shows the new maturity of the band in its best light and the entire B side of the vinyl avoids rather half-hearted songs such as 'Sea Of Flames'. The grim 'Creatures Of Destruction' is almost as intense as 'Vicious', only its chorus does not have the same impressive effect. Anyway, from an overall point of view, nobody can deny that Iron Angel had changed from a black thrash squadron to a speed metal combo with a small dose of traditional metal and rock elements. Almost each and every song possesses more melodies than the entire debut and I cannot say that this pretty radical change enthuses me. Nevertheless, I must say once again that Winds Of War is not a bad work. Definitely not flawless and suffering - among other things - from its emotional, rather shitty outro, but still equipped with a solid substance. It is not an album for the mainstream and exactly this fact makes obvious that Iron Angel did not really know in which direction they wanted to go. The end of the story is well known. The actually highly talented formation vanished into thin air while non-fickle groups such as Sodom, Kreator or Living Death made their way. Guess that the Metal God (no, I am not speaking about Rob Halford) knows what he is doing.