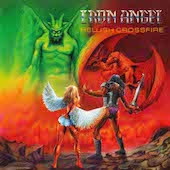 Hamburg is the second largest city in Germany and it is therefore no wonder that it has a lot to offer. This also applied to the development of the German metal scene during the early eighties of the last millennium. To be specific, the cradle of German black thrash stood in Hamburg. The child in this cradle was called Iron Angel. Its face looked a bit strange (the cover artwork), but it combined roughness with technical competence in an almost perfect way. Its musical talent was recognized at an early stage so that already its first vinyl sounded fantastic. Of course, there were pure thrash bands like Destruction or Living Death as well as black metal squadrons such as Poison or the early Sodom. Nevertheless, Iron Angel was (at least, as far as I know) the first group which offered thrash metal with a very dark aura. The thrashy music and the evil atmosphere were of equal importance. As a result, it was difficult to categorize the approach of the guys from Hamburg, because the term "black thrash" had not yet been invented. But be that as it may, one thing is for sure: Iron Angel enriched the emerging German scene in an impressive manner.

The majority of the songs came straight to the point. Already the opener progressed quickly. In the beginning, its riffs were slightly bulky. But after a break, the song turned into a powerful and sinister headbanger. The deep vocals of Dirk Schröder, in particular during the chorus, added the right amount of blackness. Elongated guitar tones announced the next highlight. The fast-paced 'Sinner 666' exhibited all the qualities of a perfect black thrash track, inter alia catchy guitar lines, malevolent vocals and an unholy atmosphere. By the way, the band proved that you do not need keyboards in order to generate this atmospheric density. But Iron Angel did not only focus on straightforward tracks. 'Black Mass' convinced with varied riffs, a mid-tempo verse and a menacing chorus. These songs defined the musical range of the album and the remaining tunes commuted between the afore-described songs. Only 'Nightmare' surprised with a slightly melodic beginning, but this was just a kind of deception. The song transformed quickly into a dark and heavy mid-tempo thrasher. Due to its very gloomy aura, it lived up to its name.

Admittedly, Iron Angel did not shine with a lot of surprising breaks. Furthermore, tempo variations were relatively few and far between. But this is just an information for those of you who seek reasons in order to dislike this work. Everybody else can rest assured that the riffing itself was original and powerful so that it was strong enough to make the songs enjoyable. Only 'Wife Of The Devil' marched to a different drummer due to its very simple construction and its strange lyrics ("she´s the devil´s wife / he fucks her every night" - honestly, I do not want to know the technical details.)

The major advantage of the production was constituted by the intense and dense guitar sound. But the whole mix did not show any signs of weakness. The drums were heavy, in particular the snare sounded naturally. Finally, the vocals did not lack vehemence. Their subliminal malignancy was omnipresent and left its mark sustainably. Rarely occurring background vocals increased the dynamic during some of the choruses. It was a pity that Iron Angel followed a more commercial approach on their second album. Nevertheless, killer tracks such as 'Legions Of Evil' or 'Sinner 666' remain unbeatable. The cradle is orphaned and the child did not live for a long time. But the spirit of this album lives on.