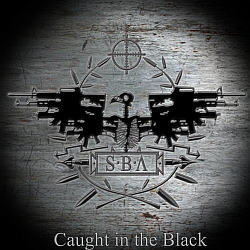 It seems that some noise is being made out of Arizona by way of a quintet called Sick Black Automatic. Admittedly, the name initially threw me off; I was sure it was going to be some rudimentary bounce-around rap-metal or screamo jargon that would send me running for an ice pick to insert into my ears. I must admit, I was happily surprised when I visited the band's Facebook page and saw some live samples that showcased some energetic metal that puts a nice dent into the mainframe of an often sterile modern day scene.

The band's CD, Caught in the Black, arrived in my mailbox yesterday, and already I've listened to it a few times. There are some catchy tunes to be had here. To be even more honest, the live clips I saw didn't do much to overly impress in terms of the vocals, but having been around this block some 35-plus years I know well enough to never put first-impression stock in any live clips captured haphazardly through hand-held celluloid. The CD has a much better platform for vocalist Norm Carrier, whose bellowing yell is not quite a death metal growl, but far removed from the artificial wailing between clean tone crooning and screaming lethargy often found in any pissant mall metal band.

As the term was adopted by and posthumously ruined by Pantera, I hasten to label anything “groove metal,”  but I must admit that if you were to assign such a label to anything and have it actually fit the mood, Sick Black Automatic captures it. While not as volatile and predictable as the aforementioned Texas bunch, SBA has assembled within its core a tempestuous, well-produced sound that dispels any notion of safety and hesitation. This album allows the music to lead the way, headlong into the sobering reality of life and all of its pitfalls. “Weapons of War,” a red flag-waving slap to the face that calls out the current state of a nation perilously in danger from its own carelessness and ambivalence. While growing up in the late 70's and all through the metal of the 80's, the fantastical side of a lyrical delivery was always most enjoyable for me; the evil and dark side of life that was both biblical and horrifying by imagined design was what moved me. What SBA does is present the facts and figures to you in the most definitive musical fashion without relying on preachy parlor tricks or boring, stagnant cut-and-paste jobs. Lyrics that make one think...ah, what will stir the lulled masses accordingly?

Musically, the band is a tight unit, playing nicely off one another and finding that coveted “pocket” in each song that is both rare and difficult to maintain. The dual guitar attack, a seemingly forbidden art form these days, screams less Judas Priest or Iron Maiden and more Lamb of God in its design, not worrying much about stylish solos or jazzy-Jones time changes. SBA is a gathering of talented guys with their collected finger  on the pulse of what passes for solid, entertaining metal music, another all-too distant remedy in today's often mundane climate. In an age where genres and their various sub-genres rule the mental abacuses of too many a critic, it's refreshing to see a band that not only doesn't fit into one set pigeon-hole, but manages to refute the modern assumption that without one you're devoid of position.

Every once in a while, a band comes along and challenges your senses. You cast a random middle finger to the “norm(s)” and just delve far inside the music filling your chosen space. Sick Black Automatic provides a staunch, no-holds glimpse into the psyche of the working man's view of a world that is far from Utopian, but not quite ruination. If you're so inclined to tap into the recesses of a reality not usually shown on network news, press play and ascend.