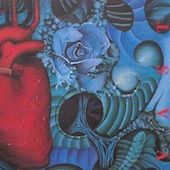 Type: Full-Length
Release Date: October 17th, 1995
Label: Skyscraper Music
Genre: Death, Thrash
1 Cold Tranquility
2 No Feelings Left
3 Unlimited Vision
4 The Praxis Of The Non-Being
5 Dreaming I
6 Dreaming II (Another Form)
7 Allusion
8 Dead Like My Dreams
9 Desire Me Not
10 Vast - The Long Tomorrow
11 ...And Flesh Will Be My Bride
12 Thou Art Lord (Acheron Cover)

No reviews on this one yet? I’ll take it!

It’s surprising, because “Vast” is an inner circle underground prog/tech death legend. Hailing from Portugal, Disaffected released their one lone album in the 90s like so many extreme metal bands, before disappearing into the unknown - unlike most of them, however, Disaffected did come back 20 years later to make music that I haven’t heard, but it exists!

“Vast” has been a weird album for me since day one. The day I had heard it was the same day I listened to “Enchiridion” from Will ‘o’ Wisp, which has since become one of my favorite albums of all time, leaving this album kind of off to the side. Recently, however, the album has made its way onto my phone and gets regular playing time and I’ve decided I like “Vast” more than I initially did.

“Vast” is basically an accumulation of all the prog/tech death albums that came out before it into one. Its main draw from my listening experience is Nocturnus - the prominent use of keyboards in every song being the biggest noticeable comparison to Nocturnus’ first two legendary albums. The atmosphere is less spacey than Nocturnus, and almost takes on a gloomy, depressive sound that was not present in many of the albums of this style to this point. This is where Phlebotomized comes in. I notice a lot of Phlebotomized-esque quirks on this album, from song structure to the keyboards being an enhancer to the music rather than just sounding like a corny sci-fi film. There’s also healthy shades of Cynic and Atheist, though the album is nowhere near as jazzy or spastic as those two. “Vast” is a pretty tame and controlled album. It's not particularly heavy or fast, focusing much more of its attention on its dark, moodier passages and just using death metal as its groundwork. Don’t worry, though; this is still very much a death metal album filled with some pretty gnarly riffs and licks and less than stellar but still passable death growls.

The album originally felt a little bloated in my opinion, but after some repeat listens there are enough elements in the music to make every song refreshing, and after a while they all began to grow on me to the point where I found myself with a different song from this record stuck in my head each day. Fifty minutes isn’t too bad for a record of its type, especially considering it’s more of a slow burner than an aggressive in-your-face kind of death metal album. There are some unnecessary slow, spoken word sections, most notably the one that begins the track “Unlimited Vision” which is more skippable than anything else - the two lone short instrumental tracks offer nothing as well.

Despite some nitpicks at song intros, I have decided that I do really enjoy this album and I’m glad I gave it enough tries to appreciate it fully. This album should be on the radar for anyone who is a fan of 90s progressive and technical death metal and most likely won’t disappoint any of its listeners. It’s bold, experimental, captivating and just a pretty gloomy record with a nice, melodic and progressive touch that makes it stand out for its time. Despite the comparisons, it really is in a league of its own.