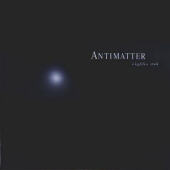 Last fall saw the release of "Saviour" through The End Records, Antimatter's excellent debut album. In January, Duncan Peterson and Mick Moss were already back into the studio to record "Lights Out." Here it is now, in our hands, and we are only in June. Kind of fast isn't it? I'm wondering if this project was not actually a double album that came out as two separate CD's!

"Lights Out" is the extension of "Saviour." This time the guys played it safe by not turning everything inside out, but rather exploring an even deeper path, which is musically stimulating and very well done. One major change is in the vocal department. Less female oriented this time around and Duncan himself makes an appearance on the opening title track. Mick Moss takes on the lead vocals, and as the promo sheet says, is "a more haunting version of Roger Waters." One can't oversee the fact that Antimatter definitely has a very Pink Floyd feel to them, particularly on 'Everything You Know is Wrong.' It's almost scary to hear something so closely related to the famous progressive band from my youth.

Musically, Antimatter delivers is lush and calm scenery made of dark and hypnotic sonic paths. Most compositions follow a slow to medium pace and the quietness of the music is at times partly interrupted by some more intense moments. Mind you, without falling into a state of heaviness. As a matter of fact, this band could best be defined as an atmospheric, psychedelic rock ensemble. The keyboards are omnipresent in the music, many times discreet and symphonic, guiding the mood. Other times, as in 'Everything You Know is Wrong,' you'll get an extra treat in the form of a solo a la Pink Floyd but also the cool sound of the electric piano. Great usage of acoustic guitars, strong bass lines and a great chorus with female backing vocals makes this song very memorable. There's more good stuff in the shape of industrial samplings, electronics percussions, lots of melodic lines and instrumental parts. This brings me to the closing number 'Terminal,' the only instrumental. It starts with classical guitar, ambient keys, then joining in the darkness, flute and harp sounds. At around 4:00 into the song, the emotion becomes more intense as the keys turn it into a more symphonic face before an apocalyptic mood lead by industrial samplings terminate your musical journey. It's truly a highlight of "Lights Out."