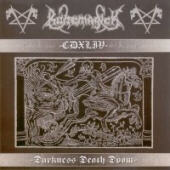 Amongst a metal world full of deathly gazes and consistently depressing moments, Runemagick are something of an eternal-continuum in the doom and death metal scene. Never quite attaining the immortal greatness to truly raise them above the bands that just 'hover,' yet always putting out records that have some truly fantastic material, Runemagick might appear something of a frustration.

Last year's "Requiem of the Apocalypse" was certainly a solid record, yet didn't really smack you in the face with its sheer force, and it definitely wouldn't win any excitement awards. One for fans of the genre. This year round, Runemagick haven't really changed their approach towards their darkness death doom brand of metal, they just seemed to have refined and worked on their art to such an amount that it doesn't stagnate out of favour like "Requiem of the Apocalypse" had a tendency to.

Bottom Line: With the most appropriate record title in history (seriously... this is the most aptly titled album ever) "Darkness Death Doom" is a disc that lovers of old school death metal, and slightly newer wave of doom metal will jump right into without a worry in the world; brutal, yet mysteriously calming. The Runemagick warhorse keeps on running.