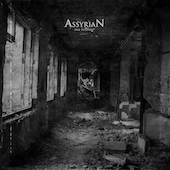 Mexican metal can be good at times, so when I was charged with handling the review of doom masters Assyrian, I was excited. Never hearing Mexican doom metal before, I thought that I might be up for something that might be different in ways. I should not let myself hope like this...

On the surface... this does not scream doom metal here, far from it.  I think that they are a frustrated, third rate Nu-death metal band that tried to move over to the doom side of things to kick start a floundering career.  They seem to have some good musicians, but I think they would be better to go back to death. It sounds nice in little spots, but there is a lack of both power and the necessary passion to do some good doom. It seems almost if they are trying to be a doomy version of Opeth mixing with a horrid try at progressive metal as well– but with this sick and weak production no to mention the flaccid guitar sounds,  it just stands out as much as elevator music does.

Tracks like the uninspired 'Colour me' to the useless musical trial of 'Impromptu' show a band pretty much out of their league when it comes down to it.  Sure it has the low droning guitars and guttural vocals on most tracks (left over from their death days I guess) but there is no mistaking that the whole project is uninspired and smacks of a band clutching at straws after not making it in other genres. It is hard to even put into words, just how disappointed I am with this disk... not to mention bored.

As plainly as I can put it to you doom fans out there, just pay no attention to this whole album and reach for some better music (Novembers Doom or perhaps Candlemass come to mind) and use this disk for a better use than listening to. Using it in Skeet shooting would be the route I might go after experiencing this album.  Truly, and album worth not getting... just forget about them, for your sake.  I have...Thank God!!