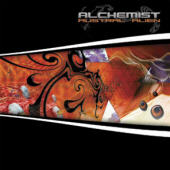 Mmm. Can you smell the eucalyptus and kangaroo droppings? Alchemist circa 2003 return to the top of the Australian metal charts with "Austral Alien." What is arguably Australia's most recognizable and successful contemporary metal outfit have once again proven themselves to be of true international quality. If these guys were located in Europe, I guarantee you they would receive the sort of exposure that the big metal acts get. I am talking Amorphis and Katatonia levels!

"Austral Alien" is a huge improvement in every way over "Organasm" (which was a bloody fine record). The lush organic architecture, which was ever-vibrant on "Organasm," is displayed proudly through the psychedelic wandering of "Austral Alien," but possibly fleshed out that bit more. Alchemist has certainly augmented what they were doing on "Organasm" and slowed things down ever so slightly to a deeper level, allowing them to hit more nerves with kaleidoscopic color waves and huge batteries of effervescent riffs that transport the listener through a vast vortex of pink koalas and purple combi-vans.

Each of the eleven tracks throughout "Austral Alien" has an undeniable psychedelic Australian feel to it, however not to the extent of being a carbon copy of one another. Each track has its own identity, its own vibe and more importantly its own unique atmosphere, which builds on the previous track to enhance the overall listening experience of the record. This is one record that you should not miss. If "Austral Alien" receives sufficient exposure I would not be at all surprised if it features amongst many of the top tens of 2003.

Hundreds of acts claim that their latest record is unbelievably diverse and that they have included 'X influences from X genres' to make their new album really 'out there' and unique. But when you sit down and listen, nine times out of ten you'll be greeted with a disc that you'll shove alongside the other clones of the industry. Alchemist is that one time out of ten, and "Austral Alien" truly shines as one of the most diverse records that we have the pleasure to call 'metal.'

Bottom Line: A more 'Australian' Alchemist arise with "Austral Alien." Those of you who enjoyed the good shit they served up with "Organasm" will find solace and enjoyment with "Austral Alien," whilst those new to the psychedelic world of Alchemist needn't look any further. This album is the personification of Australian metal. I am proud to call myself Australian.