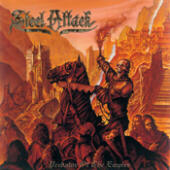 Steel Attack (I can already hear the resounding groans) has toiled away as an entity since 1997, garnering some recognition and prestige through their flaunting power displays. This year, Arise Records sees Steel Attack spring forth into action with "Predator of the Empire."

I thought we might get into the more negative aspects of Steel Attack, so that folks will have a good chance of remembering the more positive aspects that "Predator of the Empire" can offer them. While displaying addictive songs with equally catchy chorus sections, Steel Attack has unfortunately not got the consistency spot on in "Predator of the Empire" and the record does peter out towards the conclusion, leaving you feeling slightly numb and a tad regretful of seeing the album out to the end.

However, while those unfortunate points will weigh on a listener's mind, I do have to praise these guys for putting together one very commendable disc. "Predator of the Empire" is chock full of fist-pumping and spandex-craving guitar licks, accompanied by equally rolling grand choruses from main-man Dick, who really knows how to get 'high' along with the best of them. You will be sure to question when your next girlfriend will come along after bobbing along to "Predator of the Empire."

Memorable. These songs will stick in your mind, like a shit-starved fly sticks to a ten-day-old turd. Such is the infectious quality of them. Sure, the topics are absolute nonsense (arguably, one of the redeeming factors of power metal), but when '...Steal away our souls, steal away our mind, leaving nothing, but emptiness behind...' from 'Cursed Land' kicks in you'll be left feeling like a right goose when your mother catches you spilling forth utter gibberish from the bathroom.

Bottom Line: There is power within all of us, you just need the right ticket to unlock the fury. "Predator of the Empire" is so close to being one of those power records that unlocks your bridled primal instincts to get down and dirty. This one's a keeper.