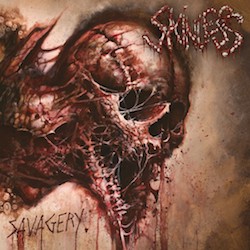 Skinless perform a very brutal form of death metal that has a pummelng effect on you.  The riffs are straight out battery and make for a very brutal offering.  This music has a scathing effect that Carcass circa Necroticism has, but has a more stripped down approach.  The beating that one gets from the music is massive.

The guitars bring a wall of pummeling tactics to the listener.  The drums back up the music to great effect and make it even more brutal. When all instruments are considered a pretty punishing offering can be found.  Now this music doesn’t have the most versatility and this is a flaw with the recording.  It could be more dynamic, but the music here certainly makes up for that with the brutality level taken to the max.  There is a more heavy flair to the songs than what Exhumed uses and it’s difficult to find a comparison point because the music Is somewhat unique.  The intro to Reversal of Fortune puts some variation to the disc with its more subtle opening, but this is some of the only respite one can find here.  Otherwise, there is a relentless flavour to the songs that brings about headbanging from the listener.  Is it a postiive characteristic to make such a brutal recording?  Well, it certainly causes an impact to be felt even if the music could be more varied.

Skinless stick to their guns and bring forth the most savage recording possible.  Though this year’s death metal release from Alkaloid provides an interesting counterpoint to the proceedings here, it is still nice to get such a brutal and vicious recording.  It’ll be interesting to see how the band follows things up and if they crank the extremity up even more.  As it stands, Savagery is a fun and hard hitting affair.

I was very mindless of the music on the first half of Savagery however, with the introduction of “Exacting Revenge”, things changed for Savagery positively. Though the first 4 tracks were diverse due to the multiple styles incorporated, they did feel like they were lacking in the attention department; they never stood apart from each other; nothing on those tracks were revealing in a good fashion. They held tightly to repetition and filler. The opening song being the title track sounded too much like crossover thrash; even some of the vocals went with that approach, not that there’s anything wrong with trying different formulas and blends, it was just added too early on in the music. The songs following it would repeat the mistake of straying away from the “brutal” aspect in pursuit of variance. I would have preferred to hear the experimentation more towards the middle section of Savagery. Then comes the interlude in the form of a 2 minute instrumental track called “Reversal of Fortune”. I think Skinless meant to name it Retraction of Misguided Concepts or better yet Back to the Drawing Board, because that’s exactly where they went with the following tracks.

The latter portion of Savagery possesses the………, well……, “savagery” so to speak. "Exacting Revenge" is the kind of track Skinless should have started the album with. It has all the root elements of brutal death metal such as the fast bulldozer drum pounding, consistently guttural vocals and untamed riffing. Savagery then takes a short break from the momentum via a doomy track in the form of “Medieval”, it does quicken in pace but remains mostly mid-paced. The following tracks build on the success of the beginning of the latter half of the album. They even manage to correct the mistakes made on the opening tracks of the album. Skinless revisited the experiments without losing the space to project the brutal death metal elements of the album.

The production of this album is excellent and is a worthy complement to the effort of the musicians playing. Savagery is an album that will take some getting used to via repetitive listens; it fails at the beginning then triumph’s towards the end.