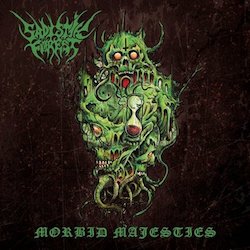 I find it criminal that Sadistik Forest have not been mentioned amongst more notable bands within the underground death metal scene. Prior to encountering this monstrous mount of malevolence in the body of Morbid Majesties I hadn't any knowledge of their existence. Upon investigation, I had discovered that Sadistik Forest existed since 2010. Since then they have released 2 full-length albums and 1 split EP featuring a death metal band known as Septory (I will be turning in their direction soon). Now in 2018 we have Morbid Majesties passing down its judgment onto the scene via wicked combinations of gruesome death growls, twisted shrieks (that sound like a cross between Randy Blythe of Lamb of God and Heljarmadr of Grá) and versatile drumming and guitars. The atmosphere Sadistik Forest paints on Morbid Majesties is strange, sometimes it feels like melodic blackened death metal, other times it radiates an apocalyptic thrash metal aurora whilst still keeping intact the death metal identity of the band. Finland is notorious for producing quality metal bands and Sadistik Forest is no exception to this.

Morbid Majesties opens with its self titled track and puts on a display of cavernous wretchedness unlike anything I've heard thus far in 2018 in terms of a new release. The growls sound deep and gurgling; it is reinforced by rugged screams and wrecking drumming and guitars. The drumming and guitars really battle for command on this 3:51 opener. Thrash metal guitar groves are mashed against the wall by brisk drumming that changes its arrangements to match the sly guitar riffing. The second track does the same; it has a war march feeling that suits the tempo of the album as a collective. Then there are slower songs such as “The Hour of Dread” which has a sedating speed, it is centered around groovy drumming and chugging guitars. There is a doomy aspect that is awakened when the guttural growls step forth. The guitar solo on it is suiting for the tempo; it has a high pitch and a great melody that matches the creeping flow of the composition. The best track on the album is a toss-up between “Zero Progress” and “Bones of A Giant”. There is a huge polarity in song structure, feeling, rhythm and time. I find it funny that the longest and shortest pieces on Morbid Majesties compete with each other. Primarily, one offers more diversity and the other offers more aggression and better songwriting. They bring out the best of the band in each aspect of their music thus advertising their skill set.

Morbid Majesties pulses with energetic and vibrant music. It is a must own for every death metal supporter/enthusiast. The incorporation of each aspect is well timed; nothing appears to be overwhelming on this sick installation. The artwork is beautifully grotesque; it struck me at first glance. I can imagine how warped a colored vinyl edition would look, especially if it matches the cover image. A green vinyl with black haze and red splatter would be terrific; take my money! This lawless legion of Sadistik Forest and Transcending Obscurity will shake and shatter the death metal underground.