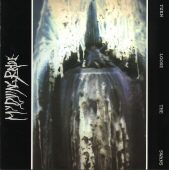 The first time I heard this record back in 1993, I was only able to hear the first song on the record (a neoclassical piece). I liked it, but it was not until the second time I heard this record that I felt its’ full impact. I was in the middle of the woods, staring at a full moon in the winter sky (which was a hazy shade of deep blue at the time). We had just finished listening to Pink Floyd’s "The Dark Side of the Moon", and a friend put this record on. By the end of the record, my perception of what was possible in metal and music in general had been drastically altered. It was perhaps the most impactful listening experience of my life, and it quite literally changed my life. It is a moment that is frozen in time, forever to be revisited with a sense of awe.

What does this album entail? While it does have some gothic elements, those elements are not nearly as dominant as in later releases. A cryptic, avant-garde style of riffing permeates the record during the doom-death passages. The death metal element is tuned down a bit from the debut (no blast beats for example), but this general style encompasses about half of the music. Whether it be the creeping doom of the title track, or the more intense sections backed by double bass drumming, the death metal riffing could not be more convincing. Nary a single riff is of poor quality; rather, I have given 6 of the 7 songs a five-star rating (the lone holdout, 'The Songless Bird', receives a 4 star rating but it just misses the cut). The other half of the riffs on this record are beautiful, melodic, and atmospheric (to a degree that has never quite been equaled). Whether we look at the verses on 'Your River', 'The Crown of Sympathy', or 'The Snow in My Hands', these sections are utterly haunting. Aaron's clean vocals are superb. Although he is a better singer at this time, the way the vocals are sung and the melodies in place are breathtaking.

There is a healthy dose of variety. Clean guitars, intricate harmonies, ambient keyboard sections, the dual vocal style, and classically inspired violin sections appear frequently (with every note falling perfectly in place). How rare is it to hear an entire record where every note played by each musician, on every song, sounds flawless to you? Although I have thousands of records I enjoy, I rarely resonate with one to this extent. The interplay between slow sections, the heavy/chunky sections, and the more intense death metal parts contributes to the diverse listening experience even further, although it all works together seamlessly. There is nothing on the album that sounds disjointed, uninspired, or poorly written. You get the feeling that the young men who created this record some 22 years ago were very inspired and creating music without boundaries, paving a new path. As for that weeping violin, the melodies and the note selection are flawless. The violin is so critical to the emotional impact of the record that I can’t quite put its’ impact into words. At times, after ingesting several beers and partying with some friends, I’ve been moved to tears by the record.

The lyrical content tends to match the obscure doom-death style of the guitar riffs. It is cryptic, obscure, very poetic, and often influenced by classic literature. There are often lyrical passages that require you to dig deeper to reveal the true meaning – nothing is obvious, it is all open to interpretation and cloaked in mystery. While the band's lyrics would become much more straightforward and obvious around the Like Gods of the Sun LP (a good record but nowhere near the majesty of Swans), the work here is masterful. You could read the lyrics alone and experience a harrowing journey. I remember reading the CD booklet without listening to the music and being carried away to a beautiful world of frost and melancholy. Despite the darkness and grimness enveloping the record, a feeling of hopefulness somehow bleeds through the fog - listening to this record has always lifted my spirits. As the title of the review indicates, this is an utterly timeless masterpiece.

Every band has one; an identifiable album that you would recommend to a potential new fan. Emperor’s “Anthems to the Welkin at Dusk”, Dimmu Borgir’s “Enthrone Darkness Triumphant”, Cannibal Corpse’s “Tomb of the Mutilated”, or if your good enough an entire plethora of quality releases; Opeth and Katatonia. 1993 was My Dying Bride’s year to shine with “Turn Loose the Swans”.

As one can tell from the rather, perhaps comically phrased title, “Turn Loose the Swans” was going to be something different, something rather special in the band’s long history. That would be a good assumption, but it’s not quite the case. “Turn Loose the Swans” was ‘the’ doom album of the year, if not the album of the year. Combining the talents of 6 lads from the British Isles, (7 if you include the female vocals of Zena on the track ‘Black God’) to make an album that is not weak in any respect whatsoever. Each track is lovingly handcrafted from the hands of musical geniuses. And in 1993 this album is something of a landmark to doom fans allover the globe.

The album picks up speed and leads the listener through just under an hour’s worth of epic doom/gothic metal production. Violins are abound throughout the record, and really add to “Turn Loose the Swans” gloomy, doomy atmosphere. There is no weak track here, all are amazing. My favourites are, ‘Sear Me MCMXCIII’ and ‘Your River’ which are probably My Dying Bride’s strongest tracks ever. Simply a breathtaking album, that will leave you speechless, as you bathe in its wake.

Bottom Line: My Dying Bride’s finest. “Turn Loose the Swans” is essential listening to any interested in somber, poetic music that covers all areas of the metal spectrum. Their best album and will become one of your best too.