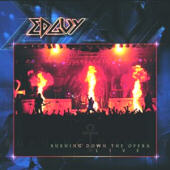 Type:
Release Date: 2003
Label: AFM Records
Genre: Power
1 Welcome To The Opera
2 Fallen Angels
3 Tears Of A Mandrake
4 Babylon
5 Land Of The Miracle
6 Painting On The Wall
7 Wings Of A Dream
8 The Headless Game
9 The Pharaoh
10 Vain Glory Opera
11 Solitary Bunny
12 Save Us Now
13 How Many Miles
14 Inside
15 Avantasia
16 Out Of Control

Symphonic power metal buffalos Edguy, and more to the point Tobias Sammet are ridiculously gifted blokes are right up there in the ranks of contemporary power metal greatness (if such a thing exists...). After 4(?) studio albums they obviously felt it's time to strum together an extensive catalogue of their greatest hits in the form of a live album.

I don't really go too much on Edguy. It's not so much the music - Edguy are just one of those bands that don't really sit well with me. However, I really enjoyed the two Avantasia records.

"Burning Down the Opera" is a solid live album and full of fun-filled moments, for example Tobias interacting with his fans – revving them up, making them sing his bouncy power chords etc, etc. Of the 15 tracks of the album, I am pretty sure you would be able to find a number from each of their records, keeping most die-hard Edguy enthusiasts happy.

Not much more to say here. You are better off checking out their back catalogue for an introduction to the world of Edguy before checking this live record out. If you enjoy Edguy's power metalling exploits I am certain that picking up this record will be a no-brainer.

Bottom Line: If you know Edguy I am pretty sure you know what to expect here. Energetically-charged frontman Tobias Sammet is charismatic and invoking in front of a pretty receptive audience. Good sound quality and an interesting set list make for a decent live record.