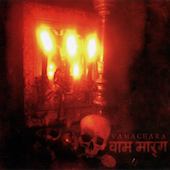 Spirituality is a feature which shows up again and again in broad parts of the Greek black metal scene. Vamachara is one of these albums that combine occultism with vehemence and metaphysics with harshness. As always, it is debatable whether the artists found the right balance between these characteristics. 'Abraxas', for example, has its own intro and outro with the effect that almost half of the song is lost. Nevertheless, the overall impression does not suffer from overly ritualistic, sensitive or otherwise non-metallic sequences.

Vamachara means something like behaving wrong or walking the left-hand path. The booklet describes it more poetically - "Vamachara stretches back to the buried past, regressing back when the Female Archetype was worshipped through the Cult of Vama..." and so on. Very interesting, but I have to pay my bills in the here and now. Anyway, the aura of the compositions conveys this meaning very well. All songs are painted in pretty dark colors and no signs of happiness or trust in God appear. The stormy title track sets a good example. The strict whippings of the drums and the crushing guitar leads are the ingredients of a hellish brew which is crowned by the commanding and conjuring voice of the lead singer. This mix triggers an enormous intensity. Moreover, it proves evidence that the dudes have a fine instinct for the typical form of the sub-genre they prefer, even though the track ends with a slightly dubious melodic part. However, maybe this is the nub of the problem: Acherontas have very good ideas and they create fascinating scenarios whenever they set their demons free, but they always fear to lose their melodic facet. Of course, there exist many bands that focus on total destruction exclusively. Nevertheless, sometimes I wish Vamachara would hold more sequences of unleashed black metal and so it is only logical that my highlight is the furious "Blood Current Illumination" with its great, charismatic vocals.

More or less pure tracks like the aforementioned highlight reveal the great potential of the group. The nearly perfectly flowing guitars set the right frame due to the comparatively warm and almost flawless production and the lead vocalist expresses pain and dedication. Nevertheless, the album suffers from a certain heterogeneity, at least to a certain degree. Or to describe it differently: either one accepts that the band also likes to perform slightly folkloric horror tunes such as 'Ohm Krim Kali' or one will struggle with the non-furious side of Acherontas eternally. From my point of view, the album cannot hide its minor flaws, but it scores with individuality and resourceful guitar work. Moreover, it has enough sequences that mirror the emotional attachment of the four musicians with the black underground. Therefore I can recommend it to every genre fan who is interested in bands that add a special flavor to the essential ingredients.