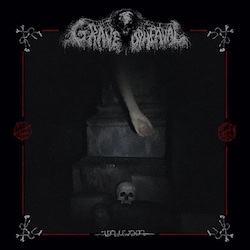 Since being introduced to the underground scene of black/death/doom metal, I have discovered bands that have crossed the borders of greatness thus transcending into a demigod status music-wise. Impetuous Ritual, Temple Nightside, Krypts, Hell's Coronation and Nocternity are just a few. Joining the pact of demigods is Grave Upheaval with their 2018 offering, Untitled II. The feeling you get when you have taken something for granted that was trying to deliver your craving for that moment in time is one that feels like you won the lotto only squander it all on junk. Here lies the album that has forced me to remove my current number 1 catch of the year 2018 thus far. A vile soundscape beholds you; loudly chanted gasps, growls from earth's nadir and ruthless riffing that is composed with slick, fast and lumbering drumming in mind. With 57 minutes of cartilage shattering bass, vocals and guitars, you will come to appreciate the effort that goes into crafting an earthquake of such magnitude.

Much emphasis is given to the loud, meaty production of Untitled II. It’s arguably the heaviest album I have heard this year with regards to the level of well motioned HM2 pedal praise. What I recognize the most about Untitled II is the improvements made over their previous full length, Untitled I. It was a decent entry but lacked cohesiveness, songs felt unattached from each other and a bit rushed and aimless sometimes. The biggest issue I had with Untitled I was that it did dwell far too long within the realm of doom and never gave the death metal a chance to be showcased even when presented with opportunities that certainly would have helped the music vary and sound refreshing. Untitled II allows each tune to build into a landscape that almost manifests as being tangible, thus giving substance and adding immersion to the overall instrumentation. The death metal appears when necessary, (though some level of patience is required before getting to that point), whilst being layered by intense waves of grueling guitar vibrations. From the first stroke of the drum kit to the last ritualistic chant, the listener feels entombed and enshrouded by this detailed monolithic piece. Untitled II has a strange emanation; it is death metal that has that Portal-esque continuous transfixing created by the fuzzy sounding tremolo picking. This doesn't come as a surprise at all, as some of the members involved in such acts play in Grave Upheaval. As I have mentioned the close acquaintance; for those of you familiar with Impetuous Ritual's Unholy Congregation of Hypocritical Ambivalence, there is an Easter egg present on “III” that put a smile on my face at the very instance of the discovery. It was pleasing to be greeted by elements of similar acts that slithered into the mausoleum instituted by Grave Upheaval.

A release offering this much grandeur will be remembered and highly revered in the future. The Australian death/doom metal underground is thriving, Grave Upheaval have placed their homeland at a towering position with Untitled II. I wanted the vinyl die hard edition of Untitled II; however, after being sold out so quickly on Nuclear War Now! Productions, I had to settle for the standard edition. In retrospect I’m sort of happy it did sell quickly, or I would have had to shovel out $60 in which I didn’t have at the time. Untitled II is worth every dollar and more, it is a timeless touch of turbulence, a deep dark piercing stare into the maze of nothingness.