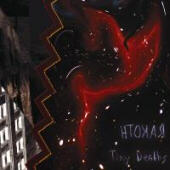 Content to continually write their own book, the Russian riddlers return with "Tiny Deaths," and an altogether different take on what they were scribbling with "Planeshift" (which looks decisively tame in comparison). The folk elements are still employed (to a more subtle extent) and there are still black metal components hiding under the sheets, but Rakoth has thrown the user manual out the window this time around, rather than resting it on the top shelf.

To approach Rakoth with preconceptions is a big, big no-no. They will thrash out whatever preemptive thoughts you had brewing up inside that deep, dark abyss you call your mind, and rip them to shreds. "Tiny Deaths" contains some truly ambitious numbers throughout its eleven tracks and walks a gamut of programmed club beats ('Trust This'), spoken Russian instrumental passages ('Horizon'), complete nonsense crooning ('Vicious Life'), and more stock standard black metal work (did I just use that phrase in conjunction with Rakoth?) in 'Tiny Deaths'.

"Tiny Deaths" is a record that requires you approach it with eyes wide open. I daresay fans of "Planeshift" will really get into what Rakoth has put together with "Tiny Deaths." If you are feeling that some of the more recent records out there are a bit insipid then you should check out "Tiny Deaths," which I can almost guarantee will provide you with some joy, even if it is fleeting.

Bottom Line: Flaunting a palpable sense of eccentricity and eclecticism yet again, Rakoth aren't going to make things simple for the easy-going listener. Jumping from point A to point K, while missing the ten preliminary steps between is a peculiar way to go about things, but then again to each their own, and "Tiny Deaths" is certainly one of those records.