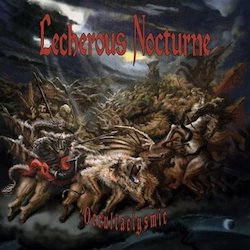 Lecherous Nocturne has always been one of those second or third-stringer type bands, despite their connections with reputable labels and big-name artists throughout the years. For all of the opportunity they've been given to break through on a bigger stage, Christian Lofgren has never quite been able to put together a true landmark release. The band has never been able to craft an identity that separates them from the Southeast US tech/brutal hybrid sound they've typecast themselves into - they don't seem like the type of band that would be anyone's all-time favorite, if you know what I mean. Despite all of this, they're solid enough and worth further investigation if atonal blasturbation is your jam.

The main knock on this for most would likely be the lack of dynamics in the speed. Any of the fast, chaotic sections - the majority of the album - all feel similarly paced because the snare emphasis tends to be the same, with no sudden rolls and very few flying finger/gravity blast style beats to create small dips and surges. The guitarwork during these section straddles an odd middle ground of cacophony and technicality - it's fast, it's noisy, the riffs often don't have a melody that's easy to stomach, but it's also not particularly note-filled by the genre's high standards, lacking both the sweeps and virtuosity of Origin and the pure angularity of Hate Eternal, despite their sound bearing huge similarities to both. If you don't already like fast music, this will do absolutely nothing to move the needle. It makes sense that Lecherous Nocturne will always remain a few tiers below the top. They're for deep divers only, because their surface characteristics aren't especially appealing to someone who only dabbles in the genre, and they don't throw in any extra garnish to make it more accessible either. It makes the music less appealing from a critical standpoint, but it's charming at the same time- it's a "fuck you" of sorts to the listener, a challenge to make sense of their filthy, convoluted mess.

One aspect of this band that doesn't get mentioned a lot is their affinity for black metal, and how they use the stripped-down aggression of bands like Tsjuder and Angelcorpse to add an extra dimension to songs such as "By Conquest or Consent", "Unidimensional Eclipse", and "Planet of the Crossing". It's a good thing they did, because the other tracks have a tendency to run together, and tax one's patience. I can see why people write this band off quickly, because they're an easy example for tech-death haters to demonstrate mindless technicality without goal. As is often the case with this style, the linear song structure, jumpy guitarwork, and a choppy vocal performance devoid of groove leaves few moments on Occultaclysmic burning in your memory. It's a fun blur while it's on in your periphery, but the second you start to make sense of it is when it starts to get less interesting.

It's not terrible background noise, though, and actually functions better in this context - when you put it on and do something else, it works as a steady brick of thrashing brutality with the occasional quasi-melodic moment peeking out to remind you that you're listening to music, but give it any more attention and focus than that and it starts to blur together in a sea of decent, but not great riffs. It's an adjustment to make, because truly exceptional music demands your focus to notice all of the little subtleties that make it so great, but Occultaclysmic demands a different listening experience because it's just a good album, not an exceptional album. A few choice cuts off this would work well in a playlist featuring similarly styled bands, but I highly doubt this is the kind of thing you'll want to buy or listen to all the way through, unless you're like me and will get literally anything with the Willowtip seal of approval.