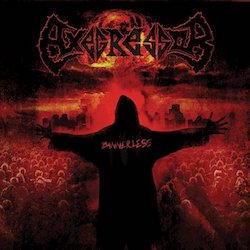 Over the span of three full-lengths, Axegressor have been a very reliable supplier of razor-sharp old school thrash and I admit that I had very high expectations with regard to their fourth album. Please keep this in mind when I say that Bannerless is marginally disappointing. Due to whatever reasons, the filthy Finns have slightly reduced the level of speed, aggression and fury. They still play thrash metal of the old way, but the sometimes-crucial iota of insanity and brutality is partly missing. Maybe the guys just have reached an age that does not allow them anymore to bang their heads regardless of the consequences. But a guy who calls himself Johnny Nuclear Winter does not have the permission to get old and lame. Firstly, the pseudonym sounds like a promise to deliver his whole life nothing else but ferocious thrash. Secondly, nobody reaches an old age in a nuclear winter.

Bannerless, the fourth one-word-title-album (two words are probably too expensive) of the Scandinavian ruffians, does not stand in the shadow of their other works as long as we are talking about the very impressive production. The heavyweight guitars prevail, and they glitter with cruel clarity, pressure and sharpness, but they do not pulverize the contributions of the other instruments. The double bass, for example, is able to deliver a decent bombardment. Not to mention the pumping, pretty prominent bass or Johnny's vocals. This dude raises his voice whenever he likes to do so, and his performance still reflects a rebellious attitude. Never hysterical, but always in a very angry and defiant mode, he screams the lyrics and it gets obvious, that the statements of the debut's title track ("we're not perfect / to play like the pro's / not classically educated / we're not one of those") are still valid. Yet this does not mean that Johnny sounds amateurish or monotonous. He spreads some energetic vibes and performs fervently. His mean aura ennobles tracks like the casually titled "Bridges to Cross and Burn".

"Barren Bloodline Worship" possesses some furious parts that catapult the song into the league of the classics of Axegressor's former records. "Truth Prostitute" is lively and fast right from the start. Its shredding and swirling guitars form a malicious thrash assault. This is the way that makes my day. But many mid-tempo parts speak another language. Axegressor often choose a comparatively gentle, nearly easy-going approach on this album. The crucial word is "comparatively". They still have a lot of energy, vigor and neck breaking qualities, but I miss frenetic tracks like "Command" or "SS-18 Satan". So, let's try another tactic and stop comparing this work with the previous results. Then I must acknowledge that Bannerless is an extremely strong produced album with more than a handful of formidable tracks. It remains a mystery to me why they have chosen a relatively uneventful track like the mid-paced "In Safe Space No One Can Hear You Scream" for the first position of the running order, but I admit that there exist more things between heaven and earth that I do not understand. Women, for example. However, I am at risk to digress. Get a copy of Bannerless and you will be able to judge for yourself.