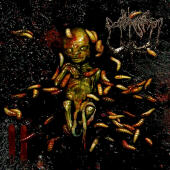 You know a gore-grind band is going to be really into it when they claim that their band is about expressing pure violence, and gore, and that melody, solos, lyrics, and song-titles where omitted from the bands repertoire. This band is Sublime Cadaveric Decomposition, and their latest and second album is an intense venture down the extreme gore-grind lane.

To be honest I'm really not a fan of gore-grind. I listen to a few select bands, but other than that, my listening habits towards the genre are strictly limited. Nonetheless, I'll try to be objective when reviewing the latest SCD output.

On one hand, this is a good piece of work. SCD are trying to make their music incredibly vile in terms of sound and presentation, and they reach that goal. The vocals are absolutely guttural and unfriendly – not really anything new for death/grind metal, but they're effective either way. The songs are intense and quick, with the guitars and drums blasting away at full speed for the entire time. Like they said, no melodic sections and no room for any solos. SCD keep a pretty tight ship. Everything comes out clear and is coherent, but not in an overly clean production fashion.

The biggest problem with SCD, and I suppose a lot of grind, is that of the twenty-two songs on their latest release, it's quite difficult distinguishing each song from the next. Besides the one or two second break between songs, they could bleed into each other and it would be difficult to tell. There aren't many discerning elements to help outline each individual song. This is what hurts SCD the most – with a little bit more attention to song arrangements and the actual riffs, they would be a much stronger outfit (and no, it wouldn't take away from the vileness).

Bottom Line: Those who are deeply rooted in the grind scene probably already know whether or not they like SCD, or at least what to expect. For those that don't, this isn't the best place to start, nor is it an excellent band. Not too bad, though.