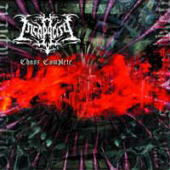 Born in the summer of 2002, Omer, label manager of Cold Records decided to ring up one of his buddies in Anders from Solar Dawn to form a band based on a combination of relentless old school death/thrash with a striking contemporary edge. Anders gathered a few mates in Andres Axelsson (Edge of Sanity), Christian Älvestam (also in Solar Dawn), Robert Ivarrson (Pan-Thy-Monium) and Henrik Schönström (Solar Dawn). The result is Incapacity and "Chaos Complete." What started out as a mere phone call now sees the light of day as full functioning behemoth of a band.

In a nutshell "Chaos Complete" is a record that is bread and butter death/thrash metal in the vein of Bloodbath and Edge of Sanity. Expect crushing wall-to-wall death metal that contrasts beautifully with thick melodious guitar riffs that underpin the bountiful thrash elements in this captivating debut. It's ultra heavy, but not to the extent of drowning out the excitement and influences of old school Swedish death metal acts that have obviously played as a huge stimulus on these guys. And all it took was a simple phone call to set the wheels in motion.

Whilst possessing the 'vibe' that might relegate Incapacity to the old school category and in turn the old and forgotten bin, fortunately for us Incapacity have enough varying tempo changes and intelligent guitar riffs to keep each track exciting and fresh; to give it the twenty first century 'touch' which separates them from being a wannabe Swedish death metal clone trying to dig up the past. Vocalist Andreas is firmly rooted in the nostalgic days of yore, but slots perfectly into the bill for Incapacity creating hoarse vocal passages and blaring choruses.

"Chaos Complete" is an exciting record which shines as one of the most steadfast and reliable releases of the year, thus far. If you feel even the slightest bit partial to Swedish death metal of a bygone era then you owe it to yourself to grab "Chaos Complete." Sure thing, "Chaos Complete" might not turn heads like some of the groundbreaking releases of today, but I bet your ass you'll be returning more to the old consistent warhorse in Incapacity – tried and true in its formula, with enough coats of varnish and paint to last the journey, than you might in the new, groovy band who try to win you over with cheap tricks.

Bottom Line: Let us pray that Omer keeps ringing up his pals. The world could do with more solid bands such as Incapacity. While not being the most original record going around, "Chaos Complete" is one of the most captivatingly composed pieces of the year, with sound contributions from each member.