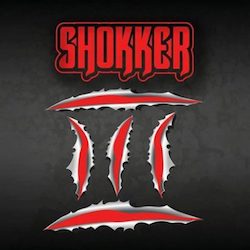 Upon venturing out last night to see the mighty Saxon in a club about the size of a classroom, I was treated to a trio of bands supporting the British legends. Chicago-based Shokker led the charge just as my wife and I were filing into the club, and the immediate high-powered vocal came soaring out over the heads of some familiar faces around me. I immediately had to check out this mighty singer from whence these unholy chords disseminated....

After buying the CD, titled III, I popped it into the player at home the next morning and was happy to hear that same intensity and drive spewing forth like a violent expulsion of musical rage throughout the room. Shokker possesses a true grasp of what real traditional metal is supposed to carry after a long and storied existence since Sabbath first spat out those haunting chords oh so many years ago. Being my first exposure to the band, I saw this redhead of smaller stature bellowing out the most encompassing vocals this side of Doro Pesch, and those same vocals carry over into the amazing CD.

I tend to not focus on the fact that a female is fronting a band, but I casually and carefully put forth the proclamation that this is what the metal community is thirsty for, and not another bevy of Tarja or symphonic clones stuck in a proverbial rut of pedestrian and overused attempts at opera. While I do align vocalist Rachl “Raxx” Quinn with such elite an peer such as Doro Pesch (for sheer power and range), I also hear some elements of Betsy Bitch, Lee Aaron, Ann Boleyn from Hellion, and Leather Leone all adding some historical fuel to this incredible singer. On III, Quinn manages to capture a long-sleeping essence sorely lacking in today's metal music: vocals that come straight from the gut.

Each track on here is a true step back into a time where heavy metal wasn't worried about being lumped into one sardonic sub-genre; it was out there for the masses to enjoy and revere. The guitar work from Casey Tremont relies more on pure heaviness and memorable hooks than trying to speed through on pointless and annoying shtick to make a musical point. “Hammerhead” from the CD is everything an old fart like me craves in today's muddy waters; the track showcases a tight unit that muscles into the psyche and carves a few notches into your cranium. The riffs and familiar power-chord punch to the face is evident on nearly every song, picking up steam with each passing second. I will say there isn't a weak track on this CD, and I'm glad I stopped to pick it up at the merch booth. Standouts for me include the aforementioned “Hammerhead,” “Snake Eyes,” Midnight Sun,” and “III,” but taking in the whole CD in several settings will most likely not be at all arduous for the fan of this type of true metal music.

The entire band makes an extremely formidable quartet (rounded out with Dan Dash on drums and Jorey Guillermo on bass), and the CD is so well-produced that it's hard to believe it's an indie release. I can't imagine a label like Pure Steel not picking up this band; they seem like they would be the perfect fit for such a home label. I will hopefully be catching Shokker in and around my hometown in the coming months, so if you see them on some tour in the coveted opening slot, give them your time – they're well worth your effort!