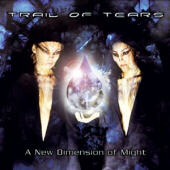 I have had this latest Trail of Tears CD in my collection for quite a few months and felt it was time to write a review on it since I think it deserves one for many reasons. "A New Dimension Of Might" is like a dear old friend on whom you can count on if you're looking for something good to listen to or bring along with you. I'll go as far as saying that the only thing you can find on this CD is good! Maybe it is the cover art, sound production, song writing, or whatever, but one thing is for sure and that is that there are goodies to be found.

I was not really a fan of Trail of Tears previous work "Profoundemonium," but the kicking out of former female singer seemed to help Trail Of Tears forge a more personal style, and her replacement, Catherine Paulsen, is a welcome operatic addition. This is definitely a gothic band as the name would make even a stranger guess so much. It's in the same vein as Tristania, Myriads and Sirenia but it has its own personality too, perhaps not as symphonic/operatic as Tristania, and a bit closer to Sirenia in sound without the violins parts. The vocals are handled in varied styles going from the usual guttural death to the already mentioned female operatic. Some guest musicians are taking care of the clean and choirs. Even if "A New Dimension Of Might" has a heavier edge caused by great riffs and loud bass lines over a hectic rhythm section, the compositions remain melodic and their structure quite progressive, thus one can say it is a progressive gothic metal album we're dealing with here. The keys play an important role in the music while adding color to whatever form they may be taking, be it symphonic, psychedelic, and hell, even techno!

Since everything is so good on this record, it's kind of hard to point out some highlights and the whole album is simply hypnotic. Nonetheless I can direct you to 'The Call Of Lust' and 'Bloodred Trance' for their grandiose atmosphere and multiple personalities: death, prog, symphonic, techno, avant-garde, and great riffs and vocals, all of which sum up to a thrilling musical experience.

Bottom Line: A must for all gothic lovers and friends of the bands mentioned above.