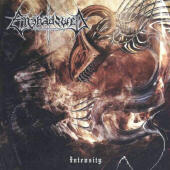 Having heard nary of a word of Enshadowed previous to "Intensity," and with a press statement listing influences such as Behemoth and Zyklon, and citing 'anti-Christian feeling' and 'pure blasphemic testimony' as what Enshadowed are all about, I began approaching "Intensity" with a fair bit of apprehension. After all, how many times have you noticed labels claiming that such and such band does this and this, but when it comes to listening to the actual record that said band doesn't deliver anywhere near what you expected them to? That's right, too many times.

"Intensity," however, delivers on all cylinders and if you count yourself as a big fan of Zyklon then you should be off to the record store to grab "Intensity" as this is one black/death metal record that needs to be experienced. The initial aspect of "Intensity" that whacked me in the face before anything else was the drumming. Hell knows why I haven't heard of V:Las.tNemesis# before, but let me assure you that this guy is one of the most technically accomplished and enterprising drummers out there at the moment. One listen to the track 'Purity's Failure' will remove any doubts or misconceptions you may have held from me giving this guy such a good review. The amount of varying fills, pace changes, etc. he goes through is phenomenal enough itself and warrants checking out "Intensity" if only for the dynamite drumming.

Drumming only makes up a fraction of any band (one fifth in their case), and it would be a true disaster if Enshadowed relied on V:Las.tNemesis# to carry them through "Intensity." Hooray for us that they don't. Vocalist Snegodron is very accomplished, delivering a thrashing black rasp, but spices things up with an equally charismatic growl that makes you stand up and take notice when it is delivered over the top of the inhuman drum work. Each song is expertly crafted and provides enough searing black/death mayhem as to give you a righteous thump in the arse if not paying adequate attention, but Enshadowed is equally as competent in delivering gentle interludes, just prior to a climax of a song, as if really emphasizing the absolute carnage that is about to rip forth in a matter of seconds.

As you might have guessed there is hell of a lot to like here. The only niggling feature of "Intensity" that is slightly less than spell-binding is the production which is a little thin, and could do with a bit beefier and thicker sound, which would enable "Intensity" to strike at you with even more venom.

Bottom Line: Enshadowed is so far above most of the contemporaries in the death/black metal field that it is embarrassing. There is no excuse to not look "Intensity" up.