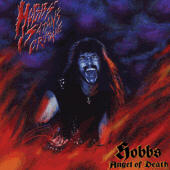 Throughout Australian metal history there are very few bands that will be thoroughly remembered for having a serviceable impact on the current makeup of metal in Australia today. For me, three main bands spring to mind; Slaughter Lord, Sadistik Exekution and Hobb's Angel of Death.

2003 sees Hobb's... finally back in game and re-releasing his two infamous demos "Angel of Death" and "Virgin Metal Invasion from Down Under" under the auspices of "Hobb's Satan's Crusade." Fully re-mastered and packing some heavy artillery "Hobb's Satan's Crusade" is a golden trip down memory lane for the ol' time metal heads out there, and for the younger lot into metal this record remains as a priceless history lesson of thrash metal history.

"Hobb's Satan's Crusade" is one of the most old school records you will ever find released in 2003 – or for the last 10 years probably. It might not be as cutting edge as the newer thrash ingredients of this day and age, but it certainly retains a specific aura that is vastly unattainable by the countless acts that plumb away tirelessly night and day, looking for that something special. Hobb's Angel of Death is something special and if you find yourself a fan of early Slayer, Sodom and Metallica in their "Kill 'Em All" days then here's another relic from the past for you to feast upon.

Bottom Line: A slice of history that should have been bought out to the masses quite some years ago. Thankfully, Hobb's... should be here to stay.