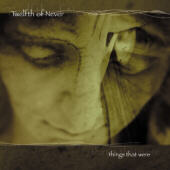 This band was originally formed in 97 by singer Robin Tinker and keyboardist player Matthew Davis. The singer brought in a couple friends to play guitar and bass in what was becoming more than just the initial past time. In 1999 came the debut self-release "Blowing Bubbles Through Broken Windows". In 2001 Dark Symphonies not only discovered but also signed them. Their second album was recorded from October to December 2002 with producer Roger Lavallee from "The Curtain Society".

"Things That Were" is sadly dedicated by Matthew Davis to Tara Harding Lee who passed away in 2002. In his words: "She was our number one fan, for a short time, I got to know the beauty of her soul". It didn't take me long to be absorbed in it; almost hypnotized by the very mood of "Things That Were". I just have the feeling I'm in a haunted house, my ear against the wall, listening to the songs and music from the very souls haunting that house. Sad and haunting.

"Things That Were" is a wonderful venture into the gothic realm. Almost scary if one considers the fact that it was dedicated to a departed friend who used to be a fan. There ends the scariness because in no way, shape or form is this opus a threat to your completeness. Quite the opposite since it is all poetry and sadness following a shadowy melodic path. Angelic female vocals give the right vibration to the lyrics. Backing vocals (male) are also present in some passages. A lot of clean acoustic or electric guitar parts along with panoramic background keys are painting the ghostly scenery depicted in the compositions. No speed or screams involved. Only good melodies from beginning to end.

My own favorite dark lights: 'Ever After Fading', 'Autumn Falls', 'The Tiny Drawer' and 'Such As Mirrors'.