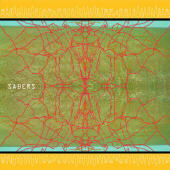 While most of the worlds bands go about their lives writing music that is melodic, structured, and relatively easy to understand, Kansas' very own duo Sabers go about things in pretty much the exact opposite way of such conventionalism. After numerous years of working together, Jeff Conaway and Charlie Hines are only now releasing their debut album "Specter" on Neurot Records.

The music that is "Specter" is certainly not commonplace and it's probably not something you're going to be in the mood for at all hours. What Sabers' music consists of is a rhythmic base that is created through sound loops, various field recordings, and drumming. On top of that you've got a guitar that is being run through multiple effects. The result is an ambient, layered, and textured set of soundscapes that are intense and hold the ability to alter moods and emotions.

When I initially listened to "Specter," I quickly caught on to the music but I was kind of stunned. At times it may seem to lack any structure, but there is in fact a rhythmic base to all of this that holds everything together. The sheets of sound effects cascade over this in an almost trance-like fashion. At first it may seem like everything is absolutely random and lacking any real direction, but through a few listens you eventually grasp the whole concept and purpose of Sabers. The music is indeed very well thought out and composed, with really no excess being used just for the sake of it. Conaway and Hines truly put a lot of thought and detail into their music. Each sound has a purpose. This may be the real genius behind "Specter." Despite its wandering qualities and ambient nature, the music is truly a well-oiled machine, working in full force. It's almost unmusical, yet at the same time so well trimmed and put together that it hardly seems as discordant and unorthodox as it really is.

Bottom Line: "Specter" is an intriguing listen that holds the power to manipulate the mind of the listener and set itself in rolling motion as an unstoppable force that invokes curiosity, enjoyment, and fear at the same time. For those brave enough to immerse themselves in the world that Sabers live in, "Specter" just might be your new home.