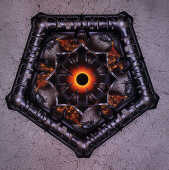 Those expecting a straight-forward thrash Testament better look somewhere else because something strange has come over the guys this time, and I don’t know what. Chuck Billy sings as if he is hypnotized, his voice (especially on the title-track) seems as distant as the stars and the drummer is not much different, it’s like he is programmed to play and nothing else. However the guitars somehow seethe with a strange, unnatural energy, creating a dismal yet powerful atmosphere. All this should ordinarily come together to a bad, lifeless, generic album but it doesn’t.

It’s as if though there is another element behind all the instruments. Something binding them all together to create something more. As the appropriate album title suggests; it’s all like a strange musical ritual that I should ordinarily view as an average metal album but don’t. The title track is the mysterious center around which everything swirls, and it is after this song that the strange atmosphere develops, the first four tracks seeming like more ordinary Testament songs and, as such, better at first impression. That impression at first made the rest of the songs seem dreary and repelling, but once I actually went in and listened to them I realized they were the true essence of the album!

'Return to Serenity' is definitely the best song on 'The Ritual' - a beautiful ballad that explores the deep corners of our mind, and has a fucking excellent solo too! 'Troubled Dreams' is a mighty finalé that serves as a powerful, energetic wake-up call after the dismal songs like 'As the Seasons Grey'. All in all, I do not recommend this album, as the average metalhead would most likely find it boring and disappointing, but I have personally found something strange and special in this album that I don’t think too many others will.

Bottom Line: Easy to misunderstand, you must look deep and hard to appreciate it.