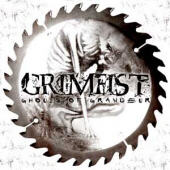 Grimfist play an unoriginal yet fairly entertaining brand of extreme metal that any metalhead should have a hard time resisting. "Ghouls of Grandeur" is chockfull of different styles of metal, from death to thrash to traditional. Already the band is gaining popularity and they're gaining it fast. Could it be that old school metal is making a comeback?

Personally, I do not see what the huge fuss about Grimfist is but I will concede to just about any complaint I have regarding their music. Most of the stuff on "Ghouls of Grandeur" has already been done by countless others, yet Grimfist still finds a way to make it sound fresh. This does not, however, change the fact that the majority of the songs on this disc are not that memorable. As a whole, "Ghouls of Graneur" is very old school sounding both musically and in terms of production, and it benefits greatly because of it. Peter Tägtgren's Abyss Studios offers a crisp, raw sound that few other studios can reproduce.

The musicianship isn't anything out of the ordinary. It is certainly obvious that each of these guys has been playing for a long time, so it was no surprise to me that the playing on "Ghouls of Grandeur" was incredibly tight and brutal. Unfortunately, I do not really hear anything beyond that. While Grimfist is sure to gain a sizable and loyal following, I do not see myself giving this album too many spins in the future. Overall, this is a modest debut from a group of talented musicians. It is good but I know that they are capable of better.