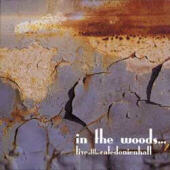 In The Woods is undeniably one of the finest acts to have graced the metal scene with their presence. Original, progressive, captivating, unpredictable... they stormed through the metal scene in a mere five years, beginning with their debut "Heart of the Ages," and ending with the album "Three By Seven On A Pilgrimage," which brought together the trilogy of 7" that In The Woods released during their existence. Those that have taken the time to become acquainted with their stunning discography have been amazed by the amazing chemistry between these individuals.

After not hearing a word from the In The Woods camp in years, finally, after much deliberation, Prophecy Productions is letting their sub-label, Karmakosmetix Records, run by the In The Woods members themselves, release the much anticipated recording of their very last show, "Live At The Caledonien Hall," which took place on the 29th of December, 2000. My experience with live albums has been that they are simply acknowledged, listened to, and then they start their shelf life. What is the reason to listen to a lesser quality recording, with imperfections, if you can listen to a full-length studio recording that has superior production and is performed without flaw? However, for a band that's missing existence is still being mourned over by certain individuals, who wouldn't want to get their hands on more material from In The Woods? Somehow, In The Woods has managed to turn a live album into a necessity for fans.

"Live At The Caledonien Hall" covers material from most of the In The Woods discography, but mostly their four major releases, "Heart Of The Ages" ('Heart Of The Ages,' 'Mourning The Death of Aase'), "Omnio" ('299.796 km/s,' 'I Am Your Flesh,' 'Kairos,' 'Weeping Wollow,' 'Omnio'), "Strange In Stereo" ('Dead Man's Creek,' 'Path of the Righteous,' 'Titan Transcendence,' 'Closing In'), and "Three By Seven On A Pilgrimage" ('White Rabbit,' 'Empty Room'). There is also an amazing cover of the excellent song 'Epitaph' by King Crimson from their "In The Court of the Crimson King" album.

On "Live At The Caledonien Hall," In The Woods sound amazing. Not necessarily because every single note is perfect, but because they do something that most bands don't – they don't play with their brains. The emotion is clearly there, as is the atmosphere. The mix sounds great, with each instrument being audible to the right extent, and not overbearing. At times the guitar tone is absolutely stunning and matches the atmosphere perfectly. Both the male and female vocalists prove beyond doubt that their talent far exceeds their reputation, which is already incredibly high. The set list itself is great, seeing as it covers all of their albums, not to mention the entire "Omnio" album.

Bottom Line: In The Woods fans can now rejoice at the fact that we've been blessed with an album that many have anticipated since the band's final show. "Live At The Caledonien Hall" fulfills all the hype and then some.