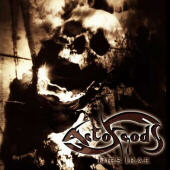 After deciding that he wanted to continue to pursue death metal in the deadliest of ways, guitarist Phil, formerly of early French death metal bands Mutilated and Abyssals, started Act of Gods. After gathering the necessary band mates, including a fellow named Venylator on vocals (who would choose such a ridiculous name?), the band entered LB Lab studios to record their first material, the four-song demo "Dies Irae."

The reason Act of Gods is worth looking into is because at this stage, they are damn good. If you think about it, this is only a demo. Once the full-length rolls around, or a few albums down the road, assuming Act of Gods make it that far, they could be a big name. I'm not saying run out and grab a copy of "Dies Irae" right now, because it's probably not something you'll play too much. I'm just saying keep your eyes and ears peeled for what this band is doing in the future, because it could turn interesting.

Bottom Line: A promising demo from this French death metal band. Not great yet, but that could turn around once a full length arises.