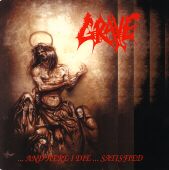 Grave's debut was a milestone of Swedish death metal, but You'll Never See... could not fully convince. It was therefore interesting to see whether the band would be able to regain its compositional quality or not. To be honest, their new songs did not give rise to a clear and unified picture.

The downer of the EP was 'I Need You', unfortunately one of the two brand new pieces. Already this title boggled my mind. I was used to song names like 'Premature Autopsy' or 'Skin Her Alive', nonsensical, but somehow fitting in a very crude way. Yet the title was, of course, not the main problem and 'I Need You' was anything else but a love song. Nonetheless, this lame, slow-moving product from the second hand market failed to offer everything which is needed to form a strong (death) metal song. Neither gripping riffs nor high velocity rhythms appeared, any form of dynamism was absent and surprising twists and turns did not show up as well. The title track itself also did not put the focus on high speed, but its creaking main riff developed a subliminal force. Without question, this track left a better impression. However, the best songs of the EP were yet to come.

Older tracks like 'Black Dawn' and 'Tremendous Pain' showed the abysmal facet of death metal in a much more impressive way than the brand new compositions. The abrasive riffing of 'Black Dawn' built the fundament of a precise high speed killer with a memorable chorus. Too bad that the sound of this number did not meet the legitimate expectations, although it was recorded during the same session as the new tracks. Generally speaking, the production of the songs was acceptable, no more, no less. Under these circumstances, it came as no surprise that early (and surprisingly powerful) recordings of 'Day Of Mourning' and 'Inhuman' kept the EP above water. Yet these tracks were already known from their great debut. They therefore did not add an enormous value to this output. Nevertheless, their maliciousness and combativeness mirrored the best side of the Swedish squadron.

Everybody who does not possess ...And Here I Die... Satisfied can relax. It is a solid EP that reflects the spirit of the early nineties, but it does not impress with any kind of outstanding features. The growling, the leads, the tempo changes - nothing offers an exceptional feature. If you want to die satisfied, listen to their debut before you commit suicide - but I hope, you have better things to do.