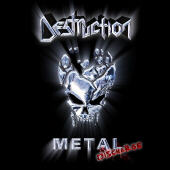 Destruction, the high priests of German thrash return with their studio album number 178. Or is it already their 179th release? I don't know, yet I swear that the band has published a lot of better full-lengths in the 20th century. Believe me, I wanted to be fascinated by the new album of my old heroes. I said to the songs "catch me if you can". Honestly, I was never an athlete and I did not even try to run away. But the compositions just shrugged their shoulders.

Destruction appears as the prime example of a band that runs slowly but steadily out of ideas. Somewhere between All Hell Breaks Loose and The Antichrist, the band lost its recipe for the creation of gripping thrashers. Metal Discharge prolongs the series of faceless tunes that fail to evoke any emotion. The soulless production with the clicking snare celebrates a triumph of the then modern age and deprives the band of its roots in a more or less radical manner. There is still a small number of good songs and the album does not make me angry or totally depressive. However, Destruction descend from a very high tier, but they descend rapidly and listening to Metal Discharge is a relatively frustrating experience. There are no songs between "The Ravenous Beast" and "Vendetta" that are able to challenge the old classics. Even semi-legendary songs of the second row, for example "Reject Emotions" or "Life Without Sense", remain unaffected. Just lend an ear to "Mortal Remains". The noisy vocals try to ruin the songs (and they are successful), the guitar lines are not clearly defined and there is absolutely no part which leaves a lasting impression. One listens to the track more or less closely, but it is forgotten as soon as it has come to its end. Destruction do not surprise with a new musical direction, but they just do not know any more how to kill with style. I can understand that the guys have lost some percentage of the juvenile energy that propped up Total Desaster or Invincible Force, but I am not able to explain the lack of deadly piercing riffs that ennobled later works like "Frustrated" or "Machinery of Lies". Yet it is true: lackluster guitar lines fall in love with emotionless solos and confused choruses fail to score with forcefulness. The typical mix of high-speed parts and mid-tempo sections causes nothing else but a stale taste. Schmier, what is wrong with you? Tommy, are you sick? Well, the guys don't give an explicit answer, but from my point of view, they need a doctor. Urgently.

After having listened to nine tracks of the album, "Vendetta" is in a comfortable situation, because the audience is more or less disillusioned. Maybe this is the reason why the closer shines with its pretty ominous aura and the slightly menacing chorus. This is not a killer track that drives me wild, but it marks a surprisingly strong closer. With regard to the ferocious, straight and strong opener "The Ravenous Beast", one could say that "Vendetta" completes the circle. Yet my edition offers an extra time. Three pretty useless cover versions form the first half of the second disc. The opener reveals the fact that Schmier's vocal chords are Maiden's "Killers" are not compatible. "Whiplash" sounds like an own composition - that's how it goes if you use a song of your idols - and "USA" (Exploited) makes clear that Schmier cannot hold a candle to old filthy Wattie in terms of performing punk songs. And, by the way, love or hate the USA, but a chorus like "F**k the USA" is painfully general and should be forbidden. The second half of the bonus disc consists of four demo tracks which impressively demonstrate why the band chose other versions for the official releases. Let's drop the subject. A world without ambivalent works like Metal Discharge would be a world worth living, too.

This German thrash metal band was arguably the first thrash metal outfit in existence. They were founded back in 1982 under the name Knight of Demon. For whatever reason, the band changed their name to Destruction after only a few weeks. From then onto 1990, they had managed to release five full-length studio albums. After 1990, their involvement in the metal scene was almost totally void. Marcel "Schmier" Schirmer left the band back in 1989, but despite his departure from the band, their spirit over the silent years survived. After a decade of pretty much zero involvement in the metal scene, vocalist/ bass guitarist Schmier and rhythm/lead guitarist Mike Sifringer reunited along with a new drummer named Sven Vormann. Their All Hell Breaks Loose release back in 2000 was a strong comeback album by the band. The Antichrist was released in 2001, which also was a monumental piece of work. After The Antichrist was released, Sven left the band due to personal reasons. Marc Reign replaced him on drum duties. Metal Discharge was their follow-up, of which didn't achieve the level of success that their two predecessors received.

This album remains to fall under the thrash metal category. However, the guitar riffs were not as prevalent as was featured on their previous album. It seemed that their guitar riff structures lacked complexity and innovation to them. The music doesn't display much thought put into it and lacks originality. Mike apparently threw together some guitar parts without putting forth many interesting qualities to them. However, the first track entitled "The Ravenous Beast" was probably the most memorable song. It has a wicked bridge/chorus section to it, and it seems as though that song is the most original sounding one. Many of the tracks on here didn't really stick in my head. The title track was a decent song, but still not too catchy. The riffs that were apparent on their two previous releases were more intriguing to listen to. "Rippin' the Flesh Apart" was another decent sounding track, but still not that great of a song. As the album progressed, the rest of the songs seemed to be pretty stale and monotonous.

"Savage Symphony of Terror" begins with a pathetic guitar/vocal output, though as the song continues, it works into a little bit better riff-writing structure to it. This album contains a lot of aggression and doesn't letup any throughout its entirety. This is a good thing though; Destruction was able to put forth somewhat of an energy filled release. I just wasn't impressed with their approach here in terms of the guitar riffs. They failed to captivate me and were not at all as good as on their two previous releases. The bridge/chorus sections for all of their songs were the best album features. The songs take some time getting used to, so don't expect to be intrigued by them when you first take a listen. When I first heard it, I was totally turned off. The reason again was because their guitar work failed to capture my interest. After a few additional spins, I grew to like it a bit more.

The production/mixing sound to it exhibits a flat tone to the music and wasn't as crisp as on their two previous releases. It was difficult to hear the bass guitar, so this left Schmiers' efforts to be lacking in this department. The double bass kicks to Marc's drumming exhibits with it another example of the failure in the mixing process. The vocals, however, were quite audible and prominent. From this aspect, I'd say that it was the highlight of the album. Marc's backup vocals were also very well heard, and success for this section was well achieved. Mike's guitar rhythms/leads lacked a real crunch tone to them. Their two previous releases were examples of a better distorted guitar sound to them. Here, they failed to capture that nice crunchy guitar feature to it. If they carried that component with them on here, then I think that it would've been a stronger release sound wise.

Mike's rhythm guitar playing was much more successful than his lead guitar efforts. I say this because he doesn't seem to initiate any useful strategies when he comprised his solos for this album. It's as though his leads were merely improvised upon; this is evident the entire way through the album. His rhythm works are no doubt much stronger than his leads. It was quite a disappointment to Destruction fans, me included. Marc's drum work was solid though despite the poor mixing. There were a lot of double bass kicks and the drum parts were formulated to fit well alongside the guitar rhythms. Schmier did a good job on vocals, but unfortunately his bass guitar work wasn't well heard again because of the poor mixing.

The lyrics focused on metal of course, and surprisingly enough politics as well. They abdicated from singing about anti-religion/Satanism topics. This is good because they were better thought out than on earlier releases. I still think that they could've been more intriguing to read, but that wasn't the case. "The Ravenous Beast" was an example of a total lack of ingenious lyrical writing. It was not only on this track but holds true for all of them. Schmier's efforts showed his total lack of education, and poor in-depth writings. He could've taken a smarter, and less nonsensical approach to his work. However, it's better that he talks about more intriguing things than just Satanic ramblings. This album would've been a bit more interesting if he put in a broader range of writing. On another note, if you purchase the limited-edition version to this album, it features a few cover songs as well as some earlier recorded demo tracks.

In conclusion, this album had some strengths and many weaknesses. This holds true for any band, but for Destruction fans, it was a total disappointment. They did not abdicate their throne in terms of putting out aggressive thrash metal, but it was difficult for the band to come up with more intriguing songs than on their two previous releases. This album really failed in putting forth effective guitar riffing that would be stunning for a listener. Mike's leads again fell short in his attempt to dish out any type of arpeggios, sweep picking and tremolo picking licks. Schmiers' vocals I still praise because of his unique sounding qualities. His voice on the album remains to be totally original. He doesn't sing like any vocalist within this thrash metal genre. This is a positive aspect to the band and album. Marc's drumming/backing vocal efforts were very well orchestrated. Because of the less than average points to the albums' overall mixing, his drum abilities didn't do him the justice that he deserved. Overall, this album fails in its efforts to persuade me to recommend it to any thrash metal fans. If you wish to hear some unique and originally sounding thrash metal music, don't pick up this one, pick up their two predecessors, All Hell Breaks Loose and The Antichrist.