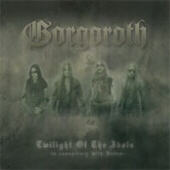 Gorgoroth's latest album captured my interest from the very start. It alternated equally between fast and mid-tempo black metal, heavily emphasizing treble distortion and blast beats, with bass that was either non-existent or inaudible. That's nothing new, but their arrangements and presentation were both so enjoyable that I kept this album on repeat for half a transatlantic flight.

Unlike many black metal impersonators, Gorgoroth create a grim, foreboding atmosphere without either drowning in keyboards or playing indiscriminately fast. Their production is deliberately poor: treble distortion and midrange static predominate. The raw, unpolished atmosphere sounds as if the band intentionally rejects a refined sound in favor of something more primitive. Gorgoroth incorporate it perfectly, using the static to add atmosphere, while never allowing their production to completely obfuscate any more technical riffs.

The songs on this album are generally short, especially for this genre, ranging from three to six minutes, but each incorporates numerous time changes, and occasional atmospheric interludes. Because of this, each song seems longer, but retains enough cohesiveness not to lose the listener. Most importantly, every song is unique, a quality that separates them from countless interchangeable black metal bands: Not only are the songs not formulaic, but they're clearly distinguishable.

One can hear some similarities to Dissection, Aeternus, or Immortal. Of course, that means there are some generic elements, but those rarely detract from the album as a whole. The emphasis on Satanic imagery can become a little silly, though: Chanting "praise Satan" over and over, to the accompaniment of long, dissonant blast beats, is something middle school children do to scare their English teacher.

Do not listen to the last track on this CD. I don't know what they were thinking, but Gorgoroth chose to end the album with one of the most irritating keyboard pieces that I've heard in many years. Fischer-Price keyboards sound neither ominous nor very grim. In fact, it sounds like Depeche Mode hijacked the studio and recorded the world's most pointless epilogue.

Bottom Line: Aggressive to mid-tempo, Satanic black metal, very competently played, with deliberately raw production. Parts of this album have been done before, but Gorgoroth do a good enough job to deserve a listen. Skip the keyboard outro, and the disc is great.