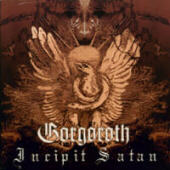 If there is at least one overrated band in terms of Norwegian black metal, it is, curtain up, Gorgoroth. The band started promisingly, but soon it became obvious that the dudes do not know much about competent songwriting. Aggravating the situation, many of their outputs suffer from a powerless production. Incipit Satan is one of them. The guitars sound fairly acceptable, but the snare drum is a loser and almost inaudible. The lead vocals are a total disappointment in terms of violence and vehemence. They do not lack charisma during the (wannabe) demonic / diabolic slow sections, but usually they just suck. In the comparatively extreme sixth track, the permanent screaming is absolutely ridiculous, but the feeble closer features even worse vocals, because the guy behind the mic really tries to sing. Bad, very bad idea.

All in all, the production cannot even create an iota of what’s needed to form an impressive black metal work: any kind of power, pressure or harshness is missing. Only 'Will to Power' does not suffer from the miserable mix, but that’s explainable. This completely idiotic keyboard/vocals track has nothing to do with black metal, it lacks metal and therefore it falls through the cracks, regardless of the quality of the sound. This piece is simply an annoyance and lengthens the album in the most despicable way. (Already the opening title track experiments with an expressionless keyboard sequence – and nobody knows why.)

I always try to find the positive aspects when it comes to the review of an album, but Incipit Satan causes so much pain that I am not really able to identify good facets. Is there just one song that surpasses the level of pale mediocrity? Maybe 'Litani til Satan' can claim this award, although it is actually a pretty boring, stomping song with a stupid fade-out at the end. Yet it scores with the best guitar lines and the most charismatic vocal performance and, moreover, it possesses a subliminal wickedness that stands in sharp contrast to the harmless guitar lines of, for example, 'A World to Win'. Without the more or less raw vocals, this track would find its rightful place on a pagan metal album. Honestly, it’s a shame. Song titles like 'Unchain my Heart!!!' (what is the purpose of the armada of exclamation marks?) or 'When Love Rages Wild in My Heart' make me think that the entire album was meant to be as a tragicomedy, but I fear the band really wants to be taken seriously. Anyway, I never really took care of the heart of a black metal musician (and vice versa, I guess) and I don’t intend to begin with this kind of altruism right now.

Some trace elements of good music, a viable riff every now and then or the instrumental, atmospheric Burzum rip-off parts in 'An Excerpt of X' prevent a total loss. But this is the album of a “legend” of true Norwegian black metal, right? It’s my review no. 1.355 and at least 1.300 releases are better than this on. Do I need to say more? Gaahl and his lame comrades appear as a formation that had to publish a new album without having anything to say. This is bitter, but it’s the truth. Stay away from this heterogeneous, useless work.

There are few bands in the metal scene that have managed to maintain high quality in their discography. It is very common to have ups and downs in their careers but sometimes there is an album that wins the competition for the disgrace of the family, the black sheep or in this case the pink sheep. Sorry Gorgoroth but Incipit Satan is certainty a dishonor for your career and almost the lowest point in your discography; only eclipsed by the disgusting 2011 version of Under the Sign of Hell.

Commercially speaking, for many newcomers into the black metal sub-genre, the word “Satan” is a magnet that attracts and captivates their curiosity to know what the most diabolic band is. Unfortunately, many bands only rely on the shocking value to get new fans (old fans are more difficult to deceive) and sell records. I think this is the case of Gorgoroth with Incipit Satan, the band is living on their savings from previous outstanding records and the music being manufactured in this album is diluted and lacks inspiration.

The first two songs, 'Incipit Satan' and 'A World to Win' are very forgettable no matter how many times you listen to those. Additionally, the weird electronic/industrial sounds that glue both tracks are just annoying and illogical even if the aim of the band is to be experimental. Gaahls's vocals are bland and do not add any sign of aggression or violence to these songs, I rather find the vocals boring through the whole record. Incipit Satan is supposed to be dedicated to Grim, the drummer on the amazing and relentless Under the Sign of Hell full length but I think he would be turning in his grave listening to the weak and insipid drum work. Talking about dullness, the song 'Litani til Satan' is the apotheosis due to its snail pace and the “kill me! I’m boring” vocals, not even a trace of the infernal style Pest used to vomit in more glorious times. The next track is called 'Unchain My Heart', a very effeminate title for a black metal song but to my regret one of the better tunes of the whole album. Showing more interesting dynamics as well as instrumentation. Then, we have 'An Excerpt of X', a kind of instrumental that ends up with some spoken words that proclaims Gaahl as one of my least favorite black metal singers of all time. Next is, 'Ein Eim av Blod og Helvetesild' which is also a track I consider worthy and saves the day for Gorgoroth for having a 0% rating. In this song the drummer seems to wake up from his slumber state and throws some good blasts here and there that kind of excites you but doesn't take the bad taste of the previous ones. The last two tracks are not really memorable, 'Will to Power' is another fail attempt to be experimental or innovative in the black metal scene but only achieve to annoy and think of put an end to this misery. Finally, 'When Love Rages wild in My Heart', another queer like song title that makes you think, “what a fuck was Infernus thinking when he named the songs here” or was it Gaahl?. I just don´t know and do not ever care but what I know is that this album was a very painful and shameful listen.

In general, it was a very short but uncomfortable experience listening to Incipit Satan. I think that these musicians are capable of executing a better piece of music but failed in neglect to do it. I found the album full of flaws in their songwriting, concept (it is supposed to have Nietzschean oriented themes) and musical execution. The word Satan is all around the album but does not really honor it. The aggression they used to have is reduced to ashes and there are only few moments where you can taste a bit only. Song titles are also a problem here, it really surprised me that a band of this caliber lack the creativity to create mean and evil names for the tracks. For a newcomer into Gorgoroth’s discography this album can be a good starting point but for diehard fans, this record is the decadence of the band.