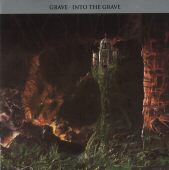 Death metal came into my world with an almost simultaneously released quartet from Sweden. I am speaking about the first albums of Dismember, Entombed, Unleashed and Grave. All of them had excellent songs and the debut from Grave has remained the most expressive full-length of their back catalogue, at least in my humble opinion. Okay, it does not hold genre hits such as "You'll Never See..." or their most catchy track ever, "Soulless" but Into the Grave scores with its monolithic structure, its total darkness and its raw power.

Even in view of the professional, sinister and powerful production: the eleven songs spread a foul smell. If I should translate the stench of a rotting corpse into music, it would sound quite similar to the here presented material. The permanently mega-deep voice of Jörgen appears as a voice from beyond and the rumbling sound of the instruments does not create any other colour than a cold, fathomless black. It might be that Grave did not deserve the award for the most innovative music in 1991, but the whole sub-genre was still in its infancy. Given this fact, it was necessary to lay the foundation with a tried and tested method and due to the fact that graves are usually under the surface, Grave were natural born experts for building a stable basement.

However, to record a generic death metal album was not their only mission. The four dudes integrated excellent riffs as well. This does not get obvious in each and every song. Nevertheless, these riffs pull the album on a high level. For instance, pick out the title track in the center of the album. A rumbling, dark riff takes a run-up and sets an unholy frame. Afterwards a short atmospheric intermezzo gives way to brutal verses and the chorus achieves an acceptable level of catchiness. This compact song has a good flow - unfortunately, this is no matter of course on this album - and no single gram of fat, that's why it marks a worthy representative of Into the Grave. The eager band manages the fast sequences very well, but it is also able to pour out thick lava that takes its way slowly and devastatingly. Some opaque and weird melody lines, not too many of course, add the final touch. One of these lines makes "Obscure Infinity" to something special, another one gilds "Day of Mourning" with a very charismatic beginning. But pure ten-ton hammers like the necro-anthem "In Love" or the fittingly titled double-bass attack "Inhuman" make clear that Grave are not overly interested in creating melody lines. The naturally extremely low-tuned guitars give their best to stifle any form of harmonic music and they are pretty successful in doing so.

Grave always stood in the shadow of their national competitors. Into the Grave does not showcase an über-hit like "Before the Creation of Time" or "Left Hand Path", but it offers coherent tracks that do not lack tempo shifts. The band never forgot to focus on the entire song and therefore no tune falls victim to an heterogeneous pattern. The different parts are well connected with each other. Even though there are songs that just pass by, exactly the opener is one of these pretty faceless tracks, Grave present an above-average hit rate and one will not find many outputs that surprise with more pristine death than this debut. Moreover, the album documents the high influence of Hellhammer in this area of extreme metal. Among other things, it follows from this that Into the Grave is definitely a strong part of the deadly quadriga from Sweden.