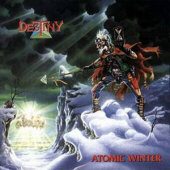 Sweden was quicker than its Scandinavian neighbors in developing an own metal community. The Finns were still sweating in their saunas, the Norwegians were catching whales the whole day long and Iceland was still waiting for electricity. Believe me, it was exactly this way (or in another, who knows?). However, Destiny belong to the bands that made an early contribution to the Swedish scene. The opener of Atomic Destiny (already the title indicates the decade of the album’s birth), “Bermuda”, sails close to the wind in the triangle of traditional metal, power and thrash. Inter alia due to its marginal yet effective keyboards in the very memorable chorus, the track develops a spooky touch and so the music and the lyrics about this mysterious place are very well aligned.

In an increasingly polarizing surrounding, Destiny did not join the ranks of the thrashing legions, but they also did not celebrate with the hair “metal” representatives. Destiny’s sound is free from any form of saccharine aroma. Instead, a profound heaviness builds the fundament of Atomic Destiny (and this is something one cannot really expect after having seen the rather imbecile artwork). The straight, conventionally designed opener marks already the climax of the nine tracks, but the majority of the further songs also reach a more than solid level and I wish that each and every album of comparable formations, for example Morgana Lefay, would achieve the class of Destiny’s second work as well. Okay, some details are irritating here. The background vocals of “Spellbreaker” or “Dark Heroes”, for instance, sound pretty irritating and the lead vocalist is good as long as he uses a comparatively raw approach, but he does not feel at home when entering the area of high tones. Either way, the overall picture does not lack coherence.

Equipped with a transparent and dry production, the album will not disappoint many metalheads, but due to its stylistic mix, it will also not belong to the jewels of their collections. The first tunes of the B side illustrate the problem. The decent “The Extreme Unction” borders on speed metal, while the dragging “Dark Heroes” (by the way, a quite mediocre piece) flirts with doom. Indeed, Destiny present their best song already at the beginning, even though the epic, slowly growing closer with its well-defined guitar work is also pretty strong. Just like the opener, it houses an eerie element and so the cycle closes. What’s left to say? I was surprised to see that the band has released so many albums. I lost their trace after Atomic Winter. Seems as if the Bermuda effect can be found in many places.