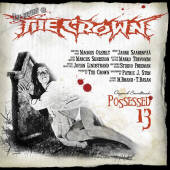 The Crown is back and so is their original singer Johan Lindstrand. The minute I heard the news that he was returning to the band I jumped for joy. Lindstand has always been one of my favorite vocalists and on Possessed 13 he proves again just how perfect he is for this band and how perfect the band is for him.

Possessed 13 sounds like the perfect follow-up to Deathrace King. While Crowned in Terror was a good album, it saw the band heading backwards slightly musically. Their new album is more or less a continuation of where they were heading on Deathrace King with more of a melodic presence. There are even two instrumentals tracks featured of Possessed 13 which show that even a band as intense as The Crown can chill out for a little while.

Again drummer Janne Saarenpaa pulls out all the stops and delivers an amazing performance. This guy is the drumfill master. The most surprising thing on this album to me is definitely the guitar work. On Possessed 13 The Crown has found a unique way to incorporate some melody into their music without tainting with their trademark sound. My favorite song on here would have to be the song 'Kill Em All.' This is an old school thrash song through and through. Maybe Metallica will get the subtle hint eh? Well one can only dream.

The Crown has matured a bit on Possessed 13 but they still know when and how to have fun. Most of you should be familiar with this band by now but for those unfortunate few who are not I urge you to pick up this album and let the headbanging begin. For the rest of us, Possessed 13 is a triumphant return to dominance from one of Sweden's most exciting and dangerous metal bands.