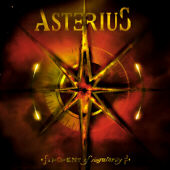 For some reason or another unusual albums are starting to increase in abundance within the metal scene; it seems like the avant-garde or generally downright weird music has found it's audience and now the breach is under a bombardment that would make the US Armed Forces blush. While trying to find their feet within this rain of mortar shells, Asterius’ release of their debut album, A Moment of Singularity, has the potential to be a Light Brigade vs. Patriot Missiles kind of affair, doesn't it? As such, it’s quite a compliment to say that with this record the band have carved quite a solid niche that bodes well for their future.

What makes Asterius special is their somewhat "Organised Chaos" approach to music; the juxtaposition of symphonic black metal elements with somewhat dual-personality dynamics provides an interesting contrast that heightens the weirdness of the music. The jagged, stop-start riffing with its sudden changes and punchy accentuations really takes each song and drags it along by the scruff off its neck, seemingly changing tack on a whim the music never becomes stilted or predictable. Dual vocals – harsh, demented rasping meets powerful, emotive singing - play on the dynamic even more; each style tidily represents the opposing sides of the music, adding to the divided nature that defines the album.

What we do lack is a full production with requisite clarity, the guitars are slightly muddy in places, the keyboards really need more prominence in the mix to fully counteract the guitars, and the drums lack the full punch to completely accentuate the off-kilter rhythms. This is typically more noticeable in the faster sections, such as the galloping section in "The One Perspective", it doesn’t hinder the music a great deal but sometimes the details get lost in the mix.

Okay, we’re not talking oddness on a ThanatoSchizo or Ephel Duath level here, but the eccentricity and unpredictability makes this album something rather unique in itself. Asterius delivers a collection of solid and interesting songs that will no doubt prove a good foundation for future works.